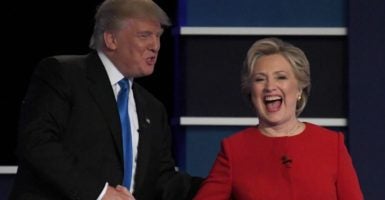 To date, there remains no evidence that Russian or any other hackers infiltrated voting machines or affected the actual casting or counting of ballots anywhere in the United States. (Photo: Pat Benic/UPI/Newscom)

The year 2016 will be remembered for many headlines: Donald Trump’s insurgent campaign and surprise election, the shocking and crushing collapse of the Clinton dynasty, and—because politics isn’t everything—the nail-biting end of the Cubs’ 108-year World Series drought.

And then, there was the political left’s apoplectic post-election meltdown and the spectacular failure of Green Party candidate Jill Stein to proffer any evidence for her claims of mass hacking of ballot boxes in the crucial states of Wisconsin, Michigan, and Pennsylvania.

In fact, to date, there remains no evidence that Russian or any other hackers infiltrated voting machines or affected the actual casting or counting of ballots anywhere in the United States.

This is not to say that Russia’s hacking of the Democratic National Committee should not be taken seriously and be fully investigated in an independent and bipartisan manner. But airing the dirty laundry of one political party is a far cry from the left’s preferred narrative: that Hillary Clinton lost to Trump because Russia rigged the election.

The left’s sudden awakening to the possibility that elections can in fact be rigged is welcome. But their epiphany seems limited only to pie-in-the-sky fantasies that would deprive conservatives of their electoral gains.

To our friends on the left, old-fashioned voter fraud—the kind that involves tampering with absentee ballots and buying votes—remains impossible, and efforts to secure against it are merely smoke screens for voter disenfranchisement.

But they are sorely mistaken, and The Heritage Foundation’s “Does Your Vote Count?” project has the data to prove it. This week, we have added 18 new cases of proven election fraud to our voter fraud database. For those keeping track, that’s 742 documented criminal convictions for all manner of election fraud—and this is likely the veritable tip of the iceberg.

Most states lack the tools to detect or prevent voter fraud, and many prosecutors do not prioritize these cases. The sad reality is that most voter fraud goes undetected and unpunished.

Here are a few of the newest entrants to the database.

Wilbur Graves, a former judge-executive for Monroe County, was convicted along with Wanda Moore, Gary Bartley, and Ronald Muse of a vote-buying scheme during the 2006 Monroe County general election.

Moore and Muse both reached plea agreements with prosecutors and testified against Graves. Moore testified that Graves provided her with $20,000 to $30,000, which Moore used to buy votes for Graves. She paid about 140 voters $40 to $60 per vote.

During a 2012 campaign for the Voters First Ohio amendment, Working America—a group associated with the AFL-CIO—hired Timothy Zureick to collect petition signatures.

Zureick forged the names of 22 prominent Democrats, including members of the Athens County Board of Elections. The Democrats on the board alerted officials when their signatures appeared on the petitions they were certifying.

Zureick pled guilty and was sentenced to serve a week in jail and to pay all court costs, as well as perform 100 hours of community service.

Brandon Hall was convicted of 10 counts of ballot petition fraud stemming from a 2012 election. Chris Houghtaling, who sought to become a candidate for the Ottawa County District Court, hired Hall to acquire the necessary signatures for his candidacy.

Houghtaling reportedly did not care whether the signatures were collected legally or illegally, and even assisted in Hall’s crime by providing him old 2010 petitions to copy.

Hall, realizing he did not collect enough signatures, used a phone book to complete the rest. Hall’s friend, Zachary Savage, assisted with the fraud, but prosecutors granted him immunity in exchange for his testimony.

Hall was sentenced to serve 30 days in jail, 18 months of probation, and was ordered to pay $3,105 in fines and legal fees and to perform 60 hours of community service.

They say the first step to solving a problem is admitting you have one, and when it comes to voter fraud, it’s long past time for America’s elected leaders—both on the right and the left—to admit the ugly truth: Voter fraud exists, and we need sensible policies to detect and prevent it. Heritage has proposed several such policies, including voter identification laws and routine checks of voter rolls.

Elections are fundamental to American democracy, and fraud undermines the will of the people and casts doubt over the democratic process. Even one case of voter fraud is too many.