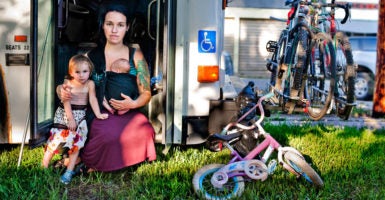 How one nonprofit is providing an alternative to the foster care system. (Photo: Shestock Blend Images/Newscom)

When David Anderson began asking volunteers in Chicago to host children from high-risk families to give them a break, he never imagined his idea would take off.

“I’m a son of a bricklayer so I never imagined that we would grow,” Anderson told The Daily Signal.

But 14 years later, his organization, Safe Families for Children, is an internationally recognized nonprofit.

The concept is simple: Instead of allowing unstable families get to the point where their children are neglected, abused, or forced into foster care, Anderson finds host families to intervene. Safe Families matches children with host families for a few weeks or months at a time, giving parents the chance to recover and get back on their feet.

“I think the only thing we’ve done is make something that’s very complex very simple,” Anderson said. “I suppose that’s the secret of a lot of innovation.”

When Anderson launched the program, he said no one in the foster care world thought his idea stood a chance.

“The belief was no one would want to do this unless there was something in it for them, either money or the ability to keep the children—adoption,” he said.

But since launching in Chicago, the program has now spread to more than 100 cities nationwide. It’s gone international in Canada and the U.K., and Anderson’s next stop is Hong Kong.

“We’re tapping into a desire to help,” he said. “And that’s incredible.”

Since 2003, Safe Families has taken in an estimated 28,000 kids. In 92 percent of the cases, children can return to their parents—which is the ultimate goal—within 60 days, on average.

A small percentage of the children end up in foster care, which is what Anderson hopes to avoid, but he said it’s good to ensure they will at least have a safe home to stay at in the short term.

“I think that’s where we have such a great opportunity to make a difference, to catch all these little guys and their parents who probably are at the front door of entering the system,” he said. “We get to stop that, literally.”

Some parents who enter the program struggle with substance abuse, while others face unemployment, incarceration, homelessness, or even an illness such as cancer.

A majority of the children are under the age of five, and operational costs are a meager $500 per child.

“It’s not a lot of money to be honest, to make such a huge impact,” Anderson said.

Most children arrive with nothing more than the clothes on their backs, but host families don’t receive stipends to pay for expenses. It’s an aspect that Anderson said is “key” to the program’s success.

“If a parent thought that somehow you were benefiting from your service, that created barriers between the two parents,” Anderson explained.

Instead, host families rely on churches and a network of supporters who pitch in to help with things like clothes, child care, and other needs.

The $500 operational cost per child is a stark difference from the cost to put a child in the foster care system, which runs upward of $19,000 per year, per child.

Because the program aims to intervene before any harm has occurred, families aren’t required to be licensed.

“If there was a requirement for all these homes to be licensed, most people wouldn’t do that,” he said. “One, because it doesn’t make sense, but secondly, it makes them almost like the arm of the state.”

The secret of the program’s success, Anderson said, isn’t just the two months on average that children spend with a host family.

“It’s really the relationship that develops between the two parents that continues after the kids are returned home, and they become like extended family,” he said, adding:

That’s really how we can help families continue to make progress. Now they have extended family, they have someone to call when things aren’t going well. That becomes the ongoing preventative aspect of supporting families.

This Christmas, Anderson and his wife said they planned to spend the day with a family who he and his wife recently helped get back on their feet. The mother of the children was struggling with substance abuse and needed time to get treatment. After going through the program, she was able to reunite with her children, while Anderson and his wife stuck by for support.

In total, Anderson and his wife have hosted an estimated 25 children over the years.

“Mother Teresa said the problem with the world is that we draw the circle of our family too small,” he said. “And I really believe that.”