Obama’s Actions Against Russia Are ‘Too Little, Too Late’ 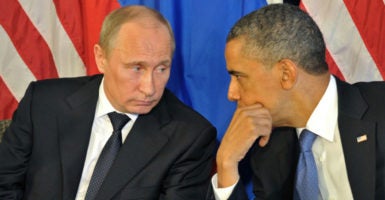 President Barack Obama on Thursday took steps to retaliate against Russia for what he called “aggressive harassment of U.S. officials and cyber operations aimed at our election.”

Obama’s actions include sanctioning Russian intelligence agencies and individuals as well as expelling 35 Russian government officials from the United States.

“These actions follow repeated private and public warnings that we have issued to the Russian government,” Obama said in a statement, “and are a necessary and appropriate response to efforts to harm U.S. interests in violation of established international norms of behavior.”

The Daily Signal asked Luke Coffey, director of The Heritage Foundation’s Douglas and Sarah Allison Center for Foreign and National Security Policy, about Obama’s actions. Here are his answers to our questions.

Some in the media are saying Russian hacking helped Donald Trump win the election against Hillary Clinton. Is there any truth to that?

Hillary Clinton lost the presidential election because the American people rejected her progressive vision of America and the idea of another four years of Obama’s failed policies. She alone is responsible for her defeat.

Russia’s actions are indeed alarming, and they must be taken seriously. Russia has a proven track record of taking an interest in the internal events and election processes of NATO member countries.

In this case, the forensic evidence released by the Department of Homeland Security and the FBI is detailed and persuasive in showing Russia hacked the Democratic National Committee. So Russian denials are not credible.

However, it should be noted that there is no evidence of any interference in the voting and ballot counting processes.

Obama took new measures Thursday to retaliate. What will those measures achieve?

Obama’s announcement of sanctions against sections of Russia’s intelligence community and expelling 35 Russian diplomats from the U.S. is welcome but long overdue. This is too little, too late.

[Russian President Vladimir] Putin respects two things: strength and consistency. Over the past eight years, Obama has shown neither of these traits. This is why Russia felt confident enough to take the actions that it did.

What steps should Congress and the White House take to investigate the extent of Russia’s actions?

Any investigation into this matter needs to be independent, bipartisan, and given enough time to do a comprehensive job. Obama’s rushed internal review lacks creditability.

The U.S. has military superiority over Russia, but technology has become more important than ever to our national security. Just how serious is the cyberthreat from Russia?

As The Heritage Foundation’s 2017 Index of U.S. Military Strength states, “Russia seeks to maximize its strategic position in the world at the expense of the United States,” maintains “incredibly advanced” cyberwarfare capabilities, and assesses “the overall threat from Russia as ‘aggressive’ and ‘formidable.’”

The U.S. intelligence community has continued to serve us skillfully and often gallantly to keep all Americans safe 24/7. That needs to be a priority now and in the future.