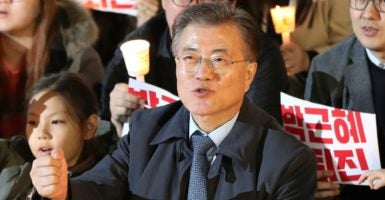 Soo Jin Hwang is a visiting fellow in the Asian Studies Center at The Heritage Foundation.

The next South Korean presidential election is scheduled to be held on or before Dec. 20, 2017. However, there is a possibility that South Korea will have its election in advance because of President Park Geun-hye’s impeachment, which led to her immediate suspension.

Potential candidates are already starting to declare their intention to run for president, including a major South Korean opposition leader, Moon Jae-in.

However, there are concerns among experts in South Korea and the U.S that progressive opposition parties are attempting to reverse current South Korean foreign policies that have been pragmatic on North Korea and have seen an improvement in U.S.-Japan-South Korea trilateral relations.

Moon, the leading progressive candidate, has persistently expressed a desire to strengthen ties with China and reopen its banner of “inter-Korean dialogue.” He also suggested he would renegotiate and review the comfort women agreement and the General Security of Military Information Agreement with Japan.

During his interview earlier this month, Moon said, “The Kaesong Industrial Complex has to be resumed immediately, and the deployment of Terminal High Altitude Area Defense has to be left as a task for the next government.”

In a recent memoir, former Foreign Minister Song Min-soon claimed that Moon was responsible for South Korea’s decision to abstain from a 2007 U.N. resolution vote on North Korea’s human rights situation after listening to Pyongyang’s opposition. At the time, Moon was chief of staff to President Roh Moo-hyun.

The question of Moon’s “suspicious security standards” has limited his increasing popularity, even as he has benefited from the recent impeachment. But according to a poll from Realmeter, Moon was still leading with a 23.7 percent support rate in early December.

There is speculation, however, that Moon will face a challenge from another progressive candidate, Lee Jae-myung, the mayor of a satellite city of Seoul. Lee ranks third in the polls and has a 14.9 percent support rate. In response to Moon’s earlier statement, Lee said he would “visit the U.S. first.” But his foreign policy proposals do not seem to vary much from Moon’s.

U.N. Secretary-General Ban Ki-moon is currently polling ahead of Lee and behind Moon with 20.5 percent of popular support. He has not spoken much about his decisions at the U.N. or his policy views because his tenure as U.N. chief has not yet expired.

The South Korean presidential race is a multicandidate field. The two most likely scenarios are: Ban vs. Moon or Ban vs. Lee. Whether Moon or Lee compete as progressive candidates, Ban will have a hard fight considering the current political atmosphere in South Korea.

The next South Korean election is important because it may affect the future of U.S.-Korean relations. If the progressive candidate wins, South Korea might pivot to China, reverse pragmatic policies against North Korea that enforce U.N. resolutions, and raise tensions against Japan—all policy moves that contravene U.S. national interests.

In this period of relative political uncertainty, the U.S. should reassure its extended guarantee of deterrence to its allies, encourage an improving relationship between South Korea and Japan, and affirm its dedication to enhancing sanctions and targeted financial measures to increase pressure on the North Korean regime.