Reagan, Bush on The Atlantic’s Short List for ‘Worst Leader of All Time’ 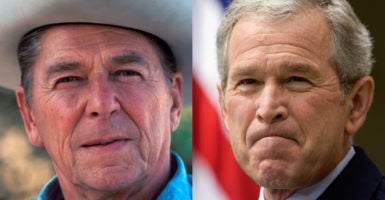 Who do you believe is the worst leader of all time?

The Atlantic asked the question in its latest issue and included two of the most recent Republican presidents on a list of 12 contenders for worst-ever leader: Ronald Reagan and George W. Bush.

Their names appear alongside some who you’d probably expect on such a list: Adolf Hitler, Pol Pot, even the devil.

Were Reagan and Bush really “the worst leader of all time?” That’s the opinion of two of the five people The Atlantic invited to contribute.

Bryan Safi, co-host of the new late-night TV show “Throwing Shade,” used this logic to rate Reagan as the worst of all time:

Ronald Reagan. Tens of thousands of gay men were wiped off the map simply because he refused to speak, much less act. What’s worse than ignoring a national health crisis while you stuff your face full of jelly beans and your wife reads her horoscope in the next room?

Here’s what Laurence Leamer, who wrote the book “The Price of Justice,” had to say about Bush:

I was thinking of Dan Snyder, the owner of the Washington Redskins, when the goofy, smiling face of President George W. Bush appeared out of nowhere. Bush’s invasion of Iraq was responsible for the deaths of hundreds of thousands and the displacement of millions, was a major factor in the dismemberment of nation-states, and the tally goes on.

The Atlantic’s decision to include Reagan and Bush on the same list as Hitler and the devil comes shortly after Jeffrey Goldberg took over as editor-in-chief.

When Goldberg took the job in October, The New York Times noted his influence over the magazine’s endorsement of Democrat Hillary Clinton:

He shaped The Atlantic’s recent editorial endorsing Hillary Clinton for president, only the third presidential endorsement in the magazine’s nearly 160-year history. The endorsement, which was published last week, called Donald J. Trump, the Republican presidential nominee, “the most ostentatiously unqualified major-party candidate in the 227-year history of the American presidency.”

In this issue’s editor’s note, Goldberg sounded off on Trump, calling him the “chief” of a “resentful tribe” who “traffics in racial invective.”

Not to be outdone, The Atlantic’s James Fallows wrote in the same issue, “I view Trump’s election as the most grievous blow that the American idea has suffered in my lifetime.”

Earlier this year, Gallup reported that Americans’ trust in the news media dropped to its lowest level ever. Just 14 percent of Republicans said they trust the media.