EPA Makes an About-Face on Fracking Report: Science or Politics? 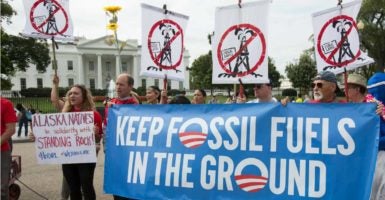 Something happened between last year and last week to make the EPA change its tune on the environmental impact of fracking. (Photo: Michael Reynolds/EPA/Newscom)

Gordon Tomb pays about $40 per month to heat his home in central Pennsylvania. And he wants to keep it that way.

“I’ve lived in Pennsylvania for more than 60 years and have never paid so little for my home heating,” Tomb, a senior fellow with the free market Commonwealth Foundation, said in an interview.

He credits his low heating bills to the boom in natural gas production brought on by hydraulic fracturing (“fracking”), which enables energy companies to tap into the state’s gas-rich Marcellus Shale formation.

“The natural gas industry has been the brightest spot in the Pennsylvania economy for the past decade and it’s likely to be for a long time,” Tomb said “It’s contributed billions to property owners in royalties and leases alone. There are hundreds of millions of dollars in tax revenues and in wages by the economic activity of hundreds of thousands of jobs.”

In 2009, a handful of Dimock, Pennsylvania, homeowners sued a Houston-based company, alleging their drinking water was tainted by fracking.

The Pennsylvania complaint and others like it from across the country prompted a five-year, $29 million Environmental Protection Agency study, which, according to a draft report released in June 2015, “did not find evidence that these mechanisms have led to widespread, systemic impacts on drinking water resources in the United States.”

This was a relief to the oil and gas industry, given that fracking currently accounts for half of the nation’s crude oil production and two-thirds of the natural gas production, yet has also been controversial.

But something happened between last year and last week to make the EPA change its tune.

But it cited no cases in which such contamination was confirmed. Instead, the EPA concluded that there is a paucity of data on which to base a conclusion, and in the instances where data is available, there are too many uncertainties to conclude anything with confidence.

“Because of the significant data gaps and uncertainties in the available data, it was not possible to fully characterize the severity of impacts, nor was it possible to calculate or estimate the national frequency of impacts on drinking water resources from activities in the hydraulic fracturing water cycle,” the study says. “We were, however, able to estimate impact frequencies in some, limited cases (i.e., spills of hydraulic fracturing fluids or produced water and mechanical integrity failures).”

On that thin reed, environmentalists are taking a victory lap. But what changed?

It wasn’t the science, according to Jeff Stier, senior fellow at the National Center for Public Policy Research, but politics.

“The EPA already said in its draft report that there was no systemic effect on the water supplies from fracking. Nothing in the underlying science of the report was changed, it’s simply a change in their framing of it,” Stier said. “There’s been a concerted political campaign to apply pressure to the EPA. Certainly the report as it was written in draft form would have taken away any leg that activists had to stand on.”

The draft report, and its fracking-favorable findings, remained status quo for more than a year.

Then in August of this year, the agency’s Science Advisory Board sent a letter to EPA Administrator Gina McCarthy. The board complained in the 180-page letter that the statement about “widespread, systemic impacts” was not supported and needed revision. The board also advised the EPA add specific research on places with a track record of reported problems—including Dimock, Pennsylvania.

On Oct. 20, McCarthy got a scathing follow-up letter signed by 51 members of Congress. The note blasted not only the 2015 draft report, but the EPA’s public handling of the report, and urged the EPA to either revise the “widespread, systemic impacts” statement, or delete it.

The EPA opted for the delete button, offering this explanation on its website:

‘Hanging on by a thread’

U.S. Rep. Matthew Cartwright, D-Pa., was among those who pressed the EPA to change its conclusion. He said that he has been at the forefront of federal efforts to crack down on fracking to protect communities and environment in which fracking occurs, including his home state.

“I am pleased that the EPA took seriously the issues raised by the Scientific Advisory Board, and revised its report accordingly,” he said. “My priority has always been to see that the fracking industry operates safely and responsibly, and I have repeatedly introduced legislation aimed at encouraging that.”

Tomb, however, is wary of any regulations coming from Washington to a state that’s well-schooled in natural resources and well-equipped with fracking regulations.

“I see nothing good about additional federal regulations in this area,” he said. “The first oil well was drilled in Pennsylvania in the mid-1800s. So this state has been dealing with this industry going on 200 years. And in my lifetime, it’s done very well.”

Stier says the push by the congressmen and the review board is part of a much broader “keep it in the ground” movement.

“The big picture opposition to fracking has nothing to do with drinking water. It’s opposition to humans taking energy out of the earth,” Stier explained. “These opponents realize they would not be able to win a political argument in the court of public opinion considering they don’t want us taking energy out of the ground. So they had to argue that this threatened our drinking water because that’s a way to get everyone to agree because we all want clean drinking water.”

Swapping out the previous conclusion is, according to Stier, a last leg for the anti-frackers on the eve of the Trump administration. “They’re hanging on by a thread to sow doubt about the safety of fracking. But I don’t think it’s a very strong leg to stand on because it’s simply a political document now.”

Indeed, a hostile letter-writing campaign will likely not have the same effect on Oklahoma Attorney General Scott Pruitt—President-elect Donald Trump’s pick to replace McCarthy at the EPA. Pruitt has been a frequent and effective critic of EPA overreach, and took a leading role in efforts to put the Obama administration’s Clean Power Plan on hold.

“From what I’ve seen so far from the Trump administration, they don’t care about idiotic claims by people looking to advance their own skewed view of how the world should be, who want to meddle in everybody’s lives and everybody’s business,” Tomb added. “Most people want to live their lives, raise their families—all that can be done and has been done, while protecting the environment.”

Kathy Hoekstra is the regulatory policy reporter for Watchdog.org.