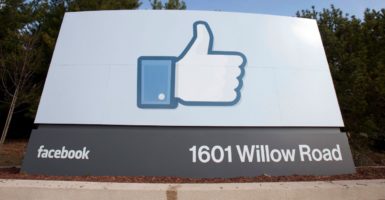 Facebook has announced it will crack down on fake news through a variety of ways, including letting users report what they deem to be fake news. (Photo: Peter DaSilva/EPA /Newscom)

In an announcement Thursday, the social media giant said it was going to crack down on fake news through a variety of ways, including letting users report what they deem to be fake news.

But one item on Facebook’s list of methods to crack down was particularly concerning:

When you look at the signatories on the Poynter list, you’ll find seven from the United States: ABC News, The Washington Post, Snopes, Associated Press, FactCheck.org, Climate Feedback, and Politifact.

Talk about the devil being in the details. These are hardly unbiased fact-checkers—conservatives have raised alarms about several of them. Let’s go through some examples:

1). Snopes. You may have heard that the terrorist who murdered 49 people and injured dozens more at the Pulse nightclub in Orlando, Florida, was a Democrat. That’s for a reason: Omar Mateen was registered as a Democrat. Yet Snopes took issue with that characterization, saying it was “undetermined” because Mateen’s “U.S. political affiliation (if any) at the time of the shooting is unknown.”

However, being a member of any particular political party involves expressing an ongoing allegiance to that party and its principles: one could be pegged as a Democrat (or a Republican, or a member of any other party) if he ran for office as a member of that party, exclusively campaigned or raised money for that party and its candidates, or consistently voted for that party’s candidates. But there’s no evidence that Mateen materially supported any particular political party, nor do we know how he voted (or whether he ever voted at all).

All we know is that 10 years ago he registered as a Democrat, and voter registration is an imperfect indicator that governs nothing more than which party’s primary a citizen is eligible to vote in …

It’s hard to make sense of this, but it basically boils down to: No one can be labeled a member of any party unless they consistently have run for office, donated money, or voted for that party’s candidates (something that could never be proved, incidentally, since we have secret ballots).

2). Politifact. Back in June, Donald Trump said, “Crime is rising.” Politifact blasted this claim as “pants on fire.” Then the American Enterprise Institute’s Sean Kennedy looked into the facts, noted Politifact had looked at statistics ending in 2014, and wrote: “The FBI’s preliminary 2015 figures actually do show crime rising in most categories across the country between 2014 and 2015.” Politifact responded … that it stood by its rating.

3). The Washington Post. Here’s a fun one: in 2015, Sen. Ted Cruz, R-Texas, said that “we, right now, have more words in the IRS code than there are in the Bible.” The Post looked at the claim and wrote, “The literally translated King James Version of the Bible contains just over 800,000 words. There are as many as 3.7 million individual words in the IRS tax code.” So Cruz deserves a true rating, right? Wrong—at least according to The Post, which went on to say: “This is a nonsense fact, something that is technically correct but ultimately meaningless.”

So perhaps in the new Facebook era, the Orlando terrorist being a Democrat, Trump discussing the rise in crime, and Cruz saying the IRS code has more words than the Bible would all be buried as “fake news” … despite being true.

Other U.S. organizations listed in the Poynter directory Facebook says it will rely on are Climate Feedback (which I’m not familiar with, but at a cursory glance does not appear to be challenging the liberal groupthink on climate change), and ABC News (home to George Stephanopoulos, who worked for the Clinton White House, and oh, didn’t disclose he had donated to the Clinton Foundation).

There is undoubtedly “fake news” online—and consumers should work to be responsible about sharing information, fact-checking themselves claims that seem spurious.

And Facebook, of course, is a private company that legally can do what it wants regarding its content.

But while Facebook legally can crack down on “fake news,” it’s unfortunate it has chosen to do so, particularly by relying on liberal organizations’ fact-checks as the arbiters.

It’s clear that the system Facebook has announced is much more likely to result in crackdowns on conservative outlets than liberal outlets—which is bad news for all of us conservatives on Facebook.