What John Bolton’s Critics Get Wrong 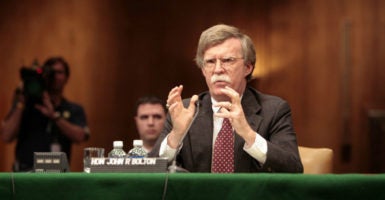 Former Ambassador John Bolton is right about a lot of things, not the least of which is that the world is a dangerous place and that the foreign policy of the past eight years under President Barack Obama has made it more so.

Yet, when asked about the possibility of President-elect Donald Trump’s nominating Bolton for a top post at the State Department, Sen. Rand Paul, R-Ky., said he would be an automatic “no” vote.

The former Republican presidential candidate said Bolton “should get nowhere close to the State Department, if anybody with a sane worldview is in charge.”

But it’s Bolton’s worldview about America’s role in the world that is the very reason he’d be a solid pick for a senior position in the Trump administration.

He believes in American exceptionalism and he understands that the freedom and security of Americans depend on strong American leadership. And his stated positions on many of today’s most pressing foreign policy issues reflect that.

Bolton believes the Iran nuclear deal is a bad deal for America and the new administration should get the U.S. out of it. He believes it not only legitimizes Iran’s path to nuclear weapons, but also protects the North Korean program and encourages proliferation elsewhere in the region.

He is right about our ineffectiveness in challenging China’s power play in the South China Sea and the threat that poses to Japan, South Korea, and Taiwan—all key U.S. allies.

He understands that international terrorism is not a second-tier issue, telling me in an interview in July that the global terrorist threat today is equal to or greater than it was on Sept. 11, 2001. Let’s just say he doesn’t buy the “JV team” theory.

Apology tours, leading from behind, and decreasing our military’s readiness are all hallmarks of Obama’s foreign policy legacy. The Trump administration must reverse course.

It would be extremely “sane,” to borrow a word from Paul, to enlist Bolton in that effort.