As South Korea Impeaches President, US Must Remain Steady Ally 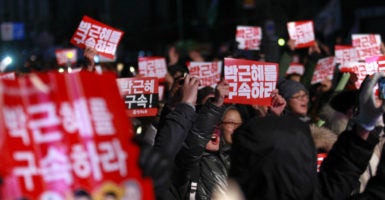 Under the country’s constitution, Park will immediately cede all her authorities to Prime Minister Hwang Kyo-ahn but remain in office until the Constitutional Court reviews the impeachment proceedings.

The largest liberal opposition party has declared that it will not accept a caretaker government under the unpopular prime minister, claiming he is also implicated in the political crisis. The conservative ruling party has issued calls to follow constitutional procedure.

South Korea has been wracked by massive public demonstrations over the past two months following revelations of a scandal that implicated a close confidant of Park.

While Park did not appear to have benefitted financially from the extensive corruption schemes of her friend Choi Soon-sil, the public felt betrayed by the seeming control Choi had over the president.

As the country waits for the Constitutional Court to deliberate—it may take up to six months—the political parties will begin to maneuver for the presidential election if Park is removed from office. The conservative Saenuri Party is heavily damaged by the Park crisis—she was concurrently the head of the party—and is likely to splinter into factions.

U.N. Secretary General Ban Ki-moon, whose term ends at the end of December, is rumored to be a likely presidential candidate. If he runs, he would likely form a new party from remnants of the Saenuri Party.

Liberal candidates have benefitted from the scandal, including Moon Jae-in—former chief of staff to previous liberal President Roh Moo-hyun. During his 2002 run for the presidency, Roh publicly declared, “What’s wrong with being anti-American?”

South Korea is already suffering from policy paralysis with the opposition parties resisting implementation of some of Park’s policies by deeming them “too controversial” during the ongoing political crisis.

Park’s impeachment will formalize the existing policy stalemate and embolden the opposition to seek to overturn many of Park’s policies that they disagree with.

If a liberal candidate wins the next presidential election, it will increase the risk of strains in South Korea’s relationship with Washington.

Liberal parties are likely to advocate for a resumption of the Kaesong and Kumgangsan economic ventures with North Korea and pursue less conditional outreach with Pyongyang.

North Korea is reveling in the political distress of its nemesis in the south. While it is always difficult to assess why Pyongyang has implemented or refrained from a provocation, the regime may have remained quiet so as not to distract South Korean legislators and demonstrators from their quest to oust Park.

While the U.S. should not comment on the domestic South Korean political crisis, the incoming Trump administration should reassure allies that, while U.S. administrations change, America’s commitment and resolve to defend its friends do not.

The U.S. should unconditionally affirm its extended guarantee of military deterrence—comprised of the nuclear umbrella, missile defense, and conventional forces—to South Korea and Japan.

To do so, however, requires fully funding defense requirements to counter drastic cuts in force levels, procurement, and operations budgets that have taken place during the Obama administration.

As such, Washington should encourage continued progress by South Korea and Japan to implement the December 2015 Comfort Women Agreement and bilateral General Security of Military Information Agreement.

Washington should affirm its dedication to enhancing sanctions and targeted financial measures to increase pressure on the North Korean regime in response to its repeated violations of U.S. and international law and U.N. Security Council resolutions.