5 Things Americans Should Know About the Renewable Fuel Standard 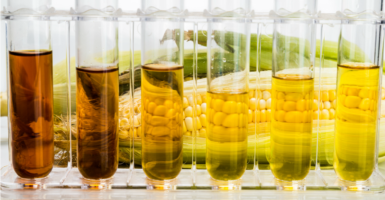 The Renewable Fuel Standard will not bring the U.S. into line with the EPA's greenhouse gas goals, according to the Government Accountability Office. (Photo: iStock Photos)

Quinn Beeson is a member of the Young Leaders Program at The Heritage Foundation.

What about this program makes it “deeply flawed?”

The Renewable Fuel Standard is a federal program administered by the Environmental Protection Agency that requires all gas sold in the United States to contain a certain amount of renewable fuels, and at annually increasing levels.

The mandate requires the use of biofuels, which are primarily made from corn and soybean products, though some are also derived from advanced biofuels from non-food sources.

Having begun in 2005, the fuel standard requires an increasing amount of biofuel to be blended into transportation fuel each year up through 2022, after which the EPA will set new volume requirements.

Here are five basic things that Americans should know about the Renewable Fuel Standard:

1. It will be years before advanced biofuels are cost effective. According to Frank Rusco, director of the natural resources and environment department at the Government Accountability Office: “It will require multiple generations of plants to achieve the kinds of efficiencies that might bring [advanced biofuel] down to where it’s commercially viable.” Yet despite the cost inefficiency of biofuels, the Renewable Fuel Standard is still demanding higher and higher levels of advanced biofuels in U.S. gas production.

2. The Renewable Fuel Standard has done next to nothing to achieve U.S. energy independence. Biofuels account for a miniscule amount of fuel in the U.S. transportation sector (see Chart 2). Meanwhile, we’ve stepped up our own gas production, thanks in part to new innovations in technology such as oil fracking. The flood of new resources has meant Americans drilled their way out of high gasoline prices—no thanks to the Renewable Fuel Standard, which forces more expensive, less energy-dense fuel into American gas tanks.

3. Biofuels  have raised food prices. Because the Renewable Fuel Standard requires a higher use of crops in fuel, it diverts more crops away from the food market, reducing the food supply and raising prices for consumers. In addition, corn prices have increased due to higher demand from the fuel standard requirements. Because corn is a staple ingredient in many foods and is a feedstock for many animals, the higher cost of corn has made all kinds of food and meat more expensive.

4. Biofuels are not actually reducing greenhouse gas emissions. The report from the Government Accountability Office found that less than 5 percent of the Renewable Fuel Standard’s biofuel target was achieved in 2015. The EPA also acknowledged that in addition to air quality, the fuel standard is expected to result in “adverse impacts on both water quality and quantity as the production of biofuels and their feedstocks increase.”

5. If the fuel standard were repealed, Americans would still use lots of biofuel—and fuel prices would be cheaper. According to the Congressional Budget Office, the U.S. would still consume between 13 and 14 billion gallons of biofuels without the Renewable Fuel Standard. Ethanol, for example, is used as a fuel additive. Without Washington picking and choosing winners, the most competitive players in the biofuel industry and agricultural economy will thrive and drive innovation within the field.

To promote a healthy market that encourages risk-taking and innovation, Congress should repeal the Renewable Fuel Standard and let consumers make their own choices at the pump.