We Looked at Cabinet Picks Over the Last 40 Years. Here’s How Trump Stacks Up So Far. 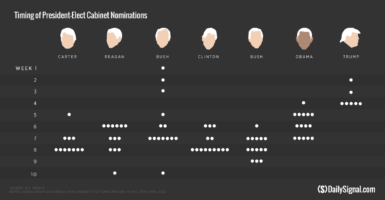 A Daily Signal analysis of Cabinet nominations dating back 40 years reveals that President-elect Donald Trump is outpacing all of his predecessors, including George H.W. Bush, who was a sitting vice president at the time of his election.

Trump’s selection of Jeff Sessions as attorney general on Nov. 18 made him the second-fastest president-elect in recent history to pick a Cabinet nominee. He added another on Nov. 23 with Besty DeVos as education secretary.

The speed of Trump’s choices is even more surprising given that Bush enjoyed the continuity of Republican government in 1988; two of Bush’s three nominations in November 1988 were holdovers from the Reagan administration. With his selection of Price and Chao, Trump is now the fastest president-elect in 40 years to fill four Cabinet roles.

Trump continues to meet with leaders across the political spectrum to discuss roles in his administration. The meetings have drawn much media fanfare, prompting The New York Times to suggest “the pace of announcements from Trump Tower has slowed to a crawl” after several days without one.

In addition to his Cabinet picks, Trump has announced that South Carolina Gov. Nikki Haley will be U.N. ambassador, retired Lt. Gen. Michael Flynn will be his national security adviser, and Rep. Mike Pompeo, R-Kan., will head the CIA. Those selections, as well as the choice of Reince Priebus and Stephen K. Bannon for White House roles, weren’t included in The Daily Signal’s analysis because they are not Cabinet-level positions.

Using historical information from the U.S. Senate (1976-2000 and 2008), The Daily Signal found that President Jimmy Carter made a total of 11 Cabinet announcements during his transition, starting in week five. The executive branch has grown to 15 Cabinet secretaries today.

>>> Trump Cabinet Timing in Line With Past Presidents

For Clinton, six of his Cabinet members were announced on Christmas Eve in 1992, eight weeks after being elected president.

President Barack Obama announced his first nominee, Timothy Geithner, in the fourth week. Geithner’s choice to lead the Treasury Department came as the United States was facing an economic recession.

So while some have said that the Trump transition is unusually “chaotic,” the history of past presidential transitions appears to show otherwise. This story was updated with news of Trump’s latest nominations.