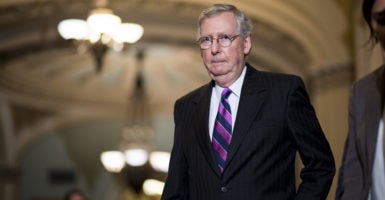 Hours after Hillary Clinton conceded the presidential election to Donald Trump, Senate Majority Leader Mitch McConnell sat down with Washington lobbyists to outline priorities for a lame-duck session of Congress later this month.

According to Politico, McConnell, R-Ky., met Wednesday night with Republican lobbyists from corporations and consulting firms. One of the subjects was possibilities for funding the government next year, Politico reported.

The current funding bill expires Dec. 9. Congress could pass an omnibus spending bill that funds the government for the entire fiscal year or a short-term continuing resolution that lasts until February or March. The latter option would allow the new Trump administration to set funding priorities with the GOP Congress.

House conservatives are opposed to an omnibus spending bill. The Republican Study Committee, a group of more than 170 lawmakers in the House, released a statement Wednesday advocating a short-term spending measure.

“The House should take the first step and pass a very short-term continuing resolution that funds the federal government until the Trump administration has put its team in place,” Republican Study Committee Chairman Bill Flores, R-Texas, said. “This CR should contain only one major policy rider—a measure preventing the Obama administration from sticking the American people with any more job-killing rules and regulations before it leaves town.”

Given voters’ unmistakable call for fiscal responsibility this week, it would be inappropriate to negotiate a lame-duck spending deal with President [Barack] Obama and [Senate Minority Leader] Harry Reid, which would further jeopardize the nation’s fiscal health at a time when the American people expect us to exhibit fiscal discipline.

Don Stewart, a spokesman for McConnell, told The Daily Signal that the Senate Appropriations Committee continues to work through the possibilities for funding the government.

“We would like to finish funding the government this year,” McConnell told reporters during a press conference Wednesday. “Exactly how to achieve that over a three-week period is a matter for discussion—how to package it, differences in the House versus the Senate—but I would like to wrap up the business of funding the government for this fiscal year this calendar year.”

Stewart said McConnell gave the “same briefing” to Republican lobbyists as the one earlier in the day during a Capitol Hill press conference.

In his meeting with lobbyists and in his press conference with reporters, McConnell also outlined his support for 21st Century Cures, legislation that aims to speed up the process for bringing medical treatments and cures to the market.

Lawmakers in the House and Senate attempted to push the bill across the finish line in September when they returned from the long August recess, but ultimately were unsuccessful.

The Republican-led Congress passed a short-term continuing resolution in September before heading home for the final weeks before Tuesday’s election. That measure keeps the government funded until Dec. 9.

Conservative lawmakers already fear that congressional leaders will use the lame-duck session to pass major pieces of legislation, as the final weeks before the end of the 114th Congress will give outgoing lawmakers their last chances to legislate.

In previous years of Obama’s presidency, lawmakers acting in a lame-duck Congress have voted to increase taxes, bail out the automotive industry, and ratify a nuclear treaty with Russia.