Post-Obamacare, These People Are Leaving Their Jobs 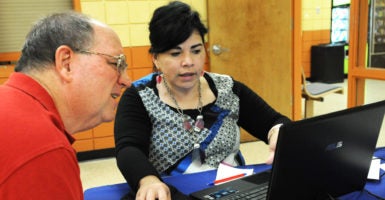 Since Obamacare's implementation, many insurers have cut the commissions paid to health insurance brokers. As a result, brokers are leaving the industry or charging clients a flat fee. (Photo: Paul Hennessy /Polaris/Newscom)

Following the public release of rates for health insurance plans under Obamacare for 2017, brokers from around the country began fielding calls from angry clients, many of whom were panicked about the rising cost of their health insurance.

But separate from the worried voices of clients on the other end of the telephone, many brokers themselves are looking toward 2017 with anxiety as health insurers have slashed or eliminated the commissions that helped them make a living.

“It’s gotten more aggressive and competitive with those who are still left because everyone is fighting for survival,” Scott Leavitt, of Scott Leavitt Insurance & Financial Services in Boise, Idaho, and the former president of the National Association of Health Insurance Underwriters, told The Daily Signal.

“The carriers are bleeding, agents are losing commissions, things are tougher than they’ve been before this,” he continued. “[Obamacare] did nothing to keep the cost of health care low.”

Brokers and agents play a crucial role in helping clients research and ultimately purchase a health insurance plan, and insurers have typically paid those brokers a commission—a set percentage per plan—when they enrolled a customer into their plans.

But in the years since Congress passed the Affordable Care Act, the commissions those brokers received have continually lessened.

Now, some insurers like Blue Cross and Blue Shield of Kansas City and Cigna will not offer commissions for 2017 exchange plans, a decision that has brokers scrambling to figure out new ways to help their clients but also make ends meet.

Aetna announced this month that it won’t be offering broker’s commission for 2017 in 14 states.

Others, like Humana, will pay a 3 percent commission to agents that help clients enroll on exchange plans.

Coventry will not offer a commission for brokers in Kansas, but will for those selling plans off of the exchanges in Missouri.

A June report from the Kaiser Family Foundation found that 49 percent of brokers surveyed said some insurers have stopped paying commission on all policies sold on Obamacare’s exchanges, and 17 percent said most or all insurers have ended their commissions.

Leavitt said he estimates roughly one-third of agents have left the industry because they are struggling to make money post-Obamacare.

“We’re being pushed out,” Leslie Kahle, a Kansas City, Kansas, broker and the vice president of the Kansas City Association of Health Underwriters, told The Daily Signal.

Most brokers and agents that sell health insurance plans can point to the specific aspect of the Affordable Care Act that changed the industry: the medical loss ratio.

Starting in 2011, insurers were required to meet minimum medical loss ratio standards, which mandated the portion of premiums that had to be allocated for medical benefits and administrative costs.

The National Association of Insurance Commissioners also issued its own warning to the government and insurers, urging Congress and the Department of Health and Human Services to “preserve consumer access to insurance agents and brokers” by adjusting the medical loss ratio.

But their efforts were ultimately unsuccessful, and the Obama administration released its final regulation in December 2010, stating insurers had to allocate 80 percent of premiums for medical benefits and 20 percent for administrative costs, which included commissions.

“Overnight, agents were making half of what they were making before,” Leavitt said. “I don’t think people realize what that one component did.”

Tom Morrill, head of Morrill Insurance Group in Kansas City, Missouri, said that in the months after the government’s regulations were finalized, brokers began receiving letters from large insurers—Blue Cross and Blue Shield, Humana, Coventry, and UnitedHealthcare—notifying them their commissions would change.

Additionally, insurers interviewed by the Government Accountability Office said they were reducing commissions to respond to Obamacare’s medical loss ratio requirements, according to a July 2011 report issued by the nonpartisan agency.

After insurers began slashing commissions, Morrill, who became a broker in 2004, said his business was cut in half, and his income dropped to $30,000 a year.

When he first started out, Morrill said commissions were around 20 percent of the price of a premium, which for him averaged $20 per plan. But over the years, they fell to 9 percent, then to 5 percent,  and then to 3 percent.

But it’s not only the medical loss ratio that’s hurt brokers and agents.

Obamacare created navigator positions that were designed to help consumers shop for and enroll in coverage on the exchanges.

Ed Haislmaier, a senior research fellow in health policy studies at The Heritage Foundation, said the navigators are “superfluous.” Haislmaier said the structure of commissions for brokers should’ve been altered so they’re paid per person regardless of the plan—and the value of that plan—selected.

“Pay the brokers, and pay them to be buyer’s agents, not seller’s agents,” he told The Daily Signal, “that way the incentives to do what’s best for the customer are there, yet the customer still benefits from the broker’s knowledge and expertise.”

Enroll America, an organization supportive of Obamacare, also agrees that it’s best for consumers if they have assistance in navigating the health insurance landscape, whether that’s in the form of brokers, navigators, or agents.

In a September report, Enroll America said those with in-person assistance are more likely to successfully enroll in a plan.

But Kahle, the broker in Kansas, said that the navigators have emerged as a competitor.

“They’re taking away all my business,” she said.

A May study from the Kaiser Family Foundation, though, found that those who received help with enrolling in a health insurance plan turned to brokers more than they did the navigators.

‘What Am I Getting Out of This?’

Unlike other insurance agents and brokers, Morrill was able to grow his business in the five years since his commissions were initially cut.

Morrill joined networking groups in the Kansas City-area as a way to meet new potential clients, and he went from 150 to 350 clients.

He also became involved in the National Association of Health Insurance Underwriters, an association for brokers and agents, and later was elected president of the organization’s local chapter.

But 2017 presents a new challenge to Morrill, as many insurers are doing away with broker commissions outright.

He predicts his income is going to drop by 50 percent next year, and Morrill said he’ll be lucky if he takes home $35,000.

Plus, he’s also experiencing the same problems as many of his clients regarding his own health insurance. Morrill’s plan with Blue Cross and Blue Shield of Kansas City was canceled for 2017, and he said his only options are plans costing at least $560 per month and with deductibles of at least $5,500.

Morrill isn’t eligible for a subsidy, which means he’ll be paying full price for his coverage.

“In the past, I never cared about what I was getting paid,” Morrill said. “But now, when you have some [insurers] paying $0, you have to look and say, ‘What am I getting out of this?’”

To compensate for income lost because of slashed commissions, brokers and agents have two options, Morrill said: they can charge each client a flat “consulting” fee for enrollment assistance or they can continue to help clients for free.

Morrill is leaning toward charging a fee, as is Kahle.

Kahle already notified her clients that they’ll have to pay $75, plus an additional hourly fee if they have issues that need mediation.

But Kahle worries that some of her clients won’t be able to afford that fee, and she’s already had people offer to trade artwork and hair appointments for her services.

Leavitt, too, said has thought about charging a flat fee, but also worries that some may not be able to afford it.

Instead, he’s diversified his portfolio of products he sells to make money.

“It’s been really tough,” Leavitt said. “A lot of people are now selling car and auto insurance investments, life insurance. A lot of 50- to 65-year-olds are changing careers or retiring early.”