Misguided Laws Could Hurt Innocents in the Creepy Clown Epidemic 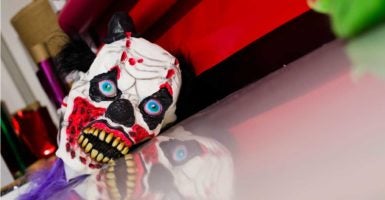 Just in time for Halloween, the world is enduring a clown epidemic resembling a “Treehouse of Horror” episode on “The Simpsons,” with more than 100 clown sightings or social media threats reported in the United States alone since August. Indeed, the epidemic appears to be global.

The craze has law enforcement on high alert, schools banning clown costumes for Halloween, and Target pulling clown masks from its shelves, all prioritizing safety before All Hallows’ Eve.

Recent creepy clown arrests also raise the specter of overcriminalization and the importance of mens rea (criminal intent): Is it a crime to dress like a clown?

A police officer, Ericson Harrell, was arrested while off duty under Florida’s anti-mask law for wearing a Guy Fawkes mask as part of a peaceful protest. Although the charges were dropped, Harrell was put on administrative leave and disciplined by his department.

If a police officer is unaware of the reach of anti-mask laws, what does that mean for the general public?

People who masquerade as clowns and intimidate innocent bystanders are likely guilty of harassment or assault. The Supreme Court of Colorado once warned that people attired as clowns “might be subject to criminal prosecution because their acts are perceived by some official to annoy or alarm others.”

Even if a harmless clown does not actively disturb others—think Bozo the Clown, not Krusty the Clown or Pogo the Clown, the notorious serial killer John Wayne Gacy—his mere presence in public is a crime against fashion, humanity, and the law in many states.

UCLA law professor Eugene Volokh explains that “wearing costumes is constitutionally protected” by the Supreme Court. Therefore, because it is likely unconstitutional for a locality to flatly ban clown costumes regardless of the circumstances, there may be a safe space for Bozos or Clarabells yet.

Congress addressed this subject in 1871 with the Ku Klux Act (or the Enforcement Act) by making it a federal crime to “go in disguise upon the public highway or upon the premises of another for the purpose, either directly or indirectly, of depriving any person or any class of persons of the equal protection of the laws, or of equal privileges or immunities under the laws.”

State legislatures in at least 18 states enacted anti-masking laws between the 1920s and 1950s to criminalize Ku Klux Klan activities where Klansmen would intimidate members of the public while wearing masks.

These laws also give prosecutors the opportunity to increase the number of charges and potential penalties against perpetrators such as bank robbers who conceal their identity in the process of committing another offense.

Virginia law, for instance, makes it a crime “for any person over 16 years of age to, with the intent to conceal his identity, wear any mask… in any public place.”

The statute goes on to name exceptions, including for holiday costumes, professional safety, theatrical performance, or medical reasons. Violating Virginia’s anti-masking law is a class 6 felony, which subjects offenders to imprisonment for one to five years.

Given that any masked clown intends to conceal his identity by covering his face, clowns spotted in public could be arrested and charged under such an overbroad anti-mask law.

People who suffer from coulrophobia (an extreme fear of clowns) might say “good riddance!” The breadth of anti-masking laws, however, can bring about unintended consequences.

Previously, the Virginia law lacked an “intent” element, such that anyone wearing a mask not subject to an enumerated exception would be deemed a felon. Lawmakers amended the law in 2014 after a bicyclist, wearing a winter mask to cover his face in the cold, was threatened with arrest.

After testifying before the Virginia Legislature, a member of the Virginia Bicycling Federation convinced legislators to amend the law in a way that would relieve winter cyclists from fear of prosecution.

Although a blanket “recreational activity” exception proposed by the Virginia Bicycling Federation was rejected, the Virginia Legislature reportedly added the intent element to recognize that someone who wears a winter mask during an outdoor activity such as bicycling “would be considered as ‘protecting their face’ rather than ‘intentionally concealing their identity.’”

Yet despite the reprieve for cyclists, other mask-wearing activities are  prohibited.

A Marine veteran was arrested for unknowingly violating the anti-masking law for skateboarding while wearing a Guy Fawkes mask in Fairfax, Virginia. The veteran endured the hardship of a criminal trial before being found not guilty of the felony in November 2015.

A conviction could have sent the veteran to prison for several years, in addition to subjecting him to the stigma and multitude of collateral consequences that come with a criminal record.

Friendly clowns, ones like Ronald McDonald, can bring a smile to many faces. Should Ronald be arrested when he walks out the door to make a public appearance?

It is reasonable to arrest a creepy-looking clown lurking in the woods. But context matters, as do free speech implications, making it incumbent on lawmakers to clearly define criminal conduct.

These cases all demonstrate the importance of mens rea, or criminal intent. Related standards prevent innocent mistakes from being treated like crimes, while specifically targeting morally culpable conduct based on action and mental intent.