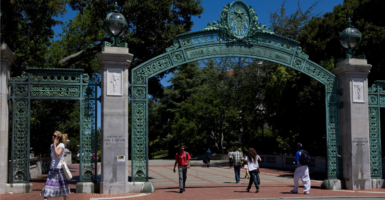 Earl De Vries, the plaintiff in a lawsuit about in-state tuition in California, is a resident and taxpayer in the state of California. He claims that the regents are spending his tax dollars in violation of federal law. (Photo: Caro/Therese Aufschlager/Newscom)

The next front in the battle over in-state tuition rates for illegal immigrants will play out in a California appeals court on Nov. 3 in a lawsuit brought by Judicial Watch on behalf of California resident and taxpayer Earl De Vries.

The issue there is not whether the California Legislature can authorize in-state tuition to illegal immigrants—courts have held that they can—but whether the University of California Board of Regents, an independent body from the state Legislature, can lawfully authorize in-state tuition for illegal immigrants at all University of California campuses in direct violation of federal law.

As we wrote a few years ago, states violate federal law (8 U.S.C. § 1623) if they give illegal immigrants in-state tuition yet refuse to give the same break to students from other states.

That provision, which is in Section 505 of the 1996 Illegal Immigration Reform and Immigrant Responsibility Act, prohibits state colleges and universities from providing in-state tuition rates to illegal immigrants “on the basis of residence within the state” unless the same in-state rates are offered to all citizens of the United States.

But that hasn’t stopped many states or the courts that have ruled in their favor and against some parents and their college-bound children who object to the states using their hard-earned tax dollars to subsidize the college education of illegal immigrants.

To get around the “residence within the state” language, states “maneuver around the [§1623] requirements … [and] have worded the legislation so that it is contingent on high school attendance and graduation, and not based on residency within the state,” according to the National Conference of State Legislatures.

How, you ask, does someone attend a high school and/or graduate from a high school yet not be a “resident” of the state? The courts have engaged in legal gymnastics to get to their desired policy outcome and avoid enforcing this federal requirement.

Other courts have simply found that Section 1623 does not create a private right of action. For example, in Day v. Bond, the 10th U.S. Circuit Court of Appeals dismissed the lawsuit brought by nonresident citizen university students and their parents against the state of Kansas.

The court held that Section 1623 does not create a private right of action and the plaintiffs lacked standing to bring an equal protection claim. We highlighted other cases that ruled against taxpayers and the intent behind Section 1623 in a Heritage Foundation study here.

We encouraged Congress to include a private right of action in subsequent legislation to give taxpayers from other states the standing to sue. That didn’t happen.

We encouraged the U.S. Department of Justice, where we both formerly worked, to sue states that were brazenly violating Section 1632 since only the Justice Department can supposedly enforce this requirement of federal law. That didn’t happen either since the Obama administration has no interest in enforcing federal immigration law.

What’s Different About This Lawsuit

The litigation this November involves another section of the 1996 Illegal Immigration Reform and Immigrant Responsibility Act, Section 1621. That federal immigration law makes illegal immigrants eligible for state or local public benefits “only through the enactment of a state law … which affirmatively provides for such eligibility.” (8 U.S.C. § 1621(d)).

But there is a twist, which is at the core of the pending lawsuit. The three state statutes apply only to unlawfully present immigrants attending California State Universities and California Community Colleges.

Why not University of California students?

Because under the California Constitution (Article IX, Section 9(a)), the regents of the University of California are “subject only to such legislative control as may be necessary to insure the security of its funds and compliance with the terms of the endowments of the university … ”

In other words, according to the lawsuit, the regents are “not subject to legislative control except on the limited matters of insolvency, endowment, and the awarding of contracts, none of which are relevant to this lawsuit.”

Earl De Vries, the plaintiff in this lawsuit, is a resident and taxpayer in the state of California. He claims that the regents are spending his tax dollars in violation of federal law, specifically Section 1621. As the appellant’s opening brief states, “No state law affirmatively provides unlawfully present aliens enrolled at UC [University of California] schools with eligibility for the benefits at issue, and yet UC’s Board of Regents is providing these benefits to the students.”

But of course that did not stop the regents from doing what they wanted to do. They adopted Policy 3106.1.C, which, according to page 4 of the brief, “purportedly [makes] unlawfully present aliens attending UC [University of California] schools eligible to apply for and receive the same in-state tuition benefits that AB 540 extends to CSU [California State University] and CCC [California Community College] students.”

And at the time of the lawsuit, the “regents are now illegally providing all three public benefits (in-state tuition, financial aid, and student loans) to unlawfully present aliens attending UC schools.”

The fiscal ramifications of these actions are staggering. According to the University of California website, the system includes more than 238,000 students and more than 190,000 faculty and staff.

In comparison, the California State University system includes 23 campuses and educates approximately 474,000 students every year. And the California Community College system is the largest system of higher education in the nation according to its website, with 2.1 million students attending 113 colleges.

We don’t know, based on available data, how many illegal (or “unlawfully present,” which is the euphemism used in the lawsuit) immigrants are attending any of the three California systems, or, of those, how many have applied for in-state tuition, financial aid, or student loans.

But given that California has the largest population of illegal immigrants of any state in the country, according to the U.S. Department of Homeland Security, there is no question that taxpayers like De Vries are paying a very large amount of money due to the illegitimate actions of the University of California regents.

What is clear is that this case turns on the proper construction of the statutory language of 8 U.S.C. 1621(d), which is unequivocal and unambiguous. The state Legislature did not authorize college-related public benefits for illegal immigrants in the University of California system.

Indeed, the Legislature could not do so, given the unique, constitutionally independent role the University of California regents play in the state. And since the regents are not a legislative body capable of enacting state law, they do not have the constitutional or legal authority to provide benefits to “unlawfully present” immigrants, and federal law prohibits such benefits being extended to illegal immigrants absent a legislative body’s affirmative act.

The regents argue that their policies alone are sufficient to provide such benefits and that the California state Assembly “invited” the regents to provide the benefits. They also claim that Section 1621 violates principles of federalism. They argue that their policies are consistent with the holding in the California Supreme Court decision in Martinez v. Regents of the University of California.

We criticized the Martinez decision here, but note, in this context, that Martinez only held that the state Assembly could provide benefits to illegal immigrants attending California State University and California Community College schools, not University of California students.

De Vries’ reply brief effectively dismantles each and every one of the regents’ arguments and shows how and why they lack merit.

This should not be a challenging case for an appeals court to decide if it simply applies the plain text of a federal statute as it is written. But, of course, the problem is that applying this unambiguous federal restriction to the undisputed facts of the case would negate the politically correct policy implemented by the University of California regents: providing in-state tuition for illegal immigrants at the expense of California taxpayers.

Unfortunately, we know that some California courts are filled with liberal, activist judges who are willing to rewrite, change, or otherwise ignore laws they don’t like or agree with, as happened in the Martinez case.

There, the California Supreme Court ignored the similarly straightforward, unambiguous text of Section 1623 of the Illegal Immigration Reform and Immigrant Responsibility Act. It held that California did not have to extend in-state tuition benefits to students from other states as required in Section 1623 even though it was now providing in-state tuition to illegal immigrants attending California State and California Community College schools.

The Martinez case was an out-and-out, unapologetic refusal by a court to enforce federal law by adopting a series of illogical legal arguments that defied common sense. Hopefully, the appeals court in the De Vries case will not indulge in the same type of legal chicanery.