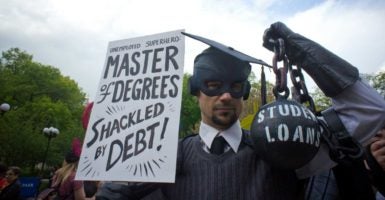 College tuition has gotten a lot of attention in 2016, but some plans to to improve it could be disastrous for students and the country. (Photo: Richard B. Levine/Newscom)

With outstanding student loan debt now exceeding $1.3 trillion, it is no wonder that the sticker price of college tuition has gotten a lot of attention in 2016. Yet few proposals have gotten to the root of the college cost problem.

Despite overwhelming evidence that more federal subsidies for higher education increase tuition prices, policies such as “tuition-free” or “debt-free” public college are attracting attention. But such plans do nothing to address price increases and shift more of the financial burden onto taxpayers.

Unfortunately, discussions of higher education policy have increasingly fixated on proposals that would fail to address college costs, and would instead exacerbate prices by creating the wrong incentives for both universities and students.

Income-based repayment, which caps loan repayments at a percentage of a student’s discretionary income, became more generous under the Obama administration.

When the program was instituted in 2007, repayments were capped at 15 percent of discretionary income. That amount fell to just 10 percent of discretionary income under President Barack Obama, and, as George Leef, of the John William Pope Center for Higher Education Policy, notes, included “zero measures intended to prevent students from binging on foolhardy borrowing.” The Pope Center is a nonprofit that advocates improving higher education.

In addition to more generous income-based repayment terms, loans are now forgiven after 20 years of payments—or just 10 years if a graduate takes a public sector job. The George W. Bush administration had previously set loan forgiveness at 25 years. Some have suggested even shortening those terms further.

Encouraging more students to borrow to attend college with the knowledge that their loans will eventually be forgiven will worsen current higher education costs.

Removing the bulk of a student’s financial responsibility from repaying a loan he or she has agreed to take out will encourage more students to borrow to attend college regardless of whether or not this is a smart financial decision for them.

Meanwhile, colleges and universities will continue to take advantage of ever-increasing federal subsidies and—if history is any guide—continue to raise their tuition prices. Furthermore, American taxpayers, many of whom do not hold bachelor’s degrees themselves, will then be asked to pick up the tab for loan forgiveness.

The federal government, as an originator and servicer of student loans, is not and should not be in the position of determining loan terms based on the perceived value of the education students are getting. By contrast, private lenders are in a better position to set loan terms based on student factors such as likelihood to repay, co-signer credit worthiness, school type, and major.

In a paper written by Andrew Kelly and Kevin James, the authors explain that private lenders can take into account “backward-looking” measures, such as a parent’s FICO mortgage score, or “forward-looking” factors such as the likelihood of completing a program and average starting salaries.

They note that “by including factors beyond traditional credit measures, these lenders can identify prospects who may lack a credit history but would likely be able to repay a loan after school.”

Unfortunately, as Leef notes, “the deck is stacked against private lenders growing very much.” He said:

One reason the authors point out is that federal law requires financial aid officers to encourage students to exhaust their government borrowing before they go into the private market. There is an obstacle to sensible higher ed financing that ought to be eliminated.

But even if we could get rid of that rule, the problem remains that federal loans are so easy and attractive (low interest rates and the prospect of partial forgiveness of the debt) that few students will even think about going into the private market.

Loan forgiveness, much like proposals for “free” public college, is misguided policy that ignores the $1.3 trillion problem. More big government solutions are not the answer. A better option is to bring down college costs competitively so that students can finance their education in a reasonable manner.

To do this, policymakers should reform the existing accreditation system so that the market can offer new innovative higher education models, restructure federal aid to better direct it to those who need it, and limit federal subsidies to make way for a restoration of private lending models.