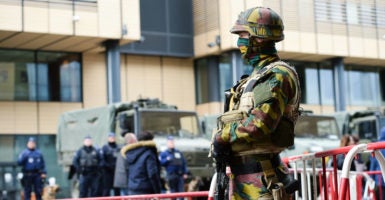 Security is reinforced around the Brussels-South railway station after two bombs exploded in the departure hall of Brussels Airport and another one in the Maelbeek subway station on March 22, 2016. The Islamic State claimed responsibility for the attacks. (Photo: JB Autissier /Panoramic/Starface/ Polaris/Newscom)

As Britain starts extricating itself from the European Union, bureaucrats in Brussels continue to hand ammunition to Brexit supporters.

The 83-page “ECRI Report on the United Kingdom” covers a wide range of alleged manifestations of intolerance in Britain. Those familiar with the deeply democratic, fair-minded, and civilized Brits will hardly recognize the country. Indeed, nowhere is it mentioned that Britain has never had fringe parties like those on the Continent, such as France’s National Front.

The British tabloid media is a particular target for the EU investigators. They blame an alleged increase in hate crimes and racism in the U.K. on the “worrying examples of intolerance and hate speech in the newspapers, online, and even among politicians.”

The fifth annual report deplores the British media for describing horrific acts of terrorism—such as those that have rocked France, Germany, and Belgium this year—as motivated by violent, militant Islam. The report says in part:

Where the media stress the Muslim background of perpetrators of terrorist acts, and devote significant coverage to it, the violent backlash against Muslims is likely to be greater than in cases where the perpetrators’ motivation is downplayed or rejected in favor of alternative explanations.

The ECRI strongly recommends that the authorities find a way to establish an independent press regulator according to the recommendations … It recommends more rigorous training for journalists to ensure better compliance with ethical standards.

The British government has firmly rejected the EU demands to censor British media, reform its laws, and impose sensitivity training on British journalists. “The government is committed to a free and open press and does not interfere with what the press does and does not publish, as long as the press abides by the law,” responded Downing Street.

Neither Europe—nor the United States, for that matter—will succeed in stemming the violence that threatens its citizens if the media cannot describe the reality and the root causes of Islamic terrorism. The ideological and religious components of the long war in which the West now finds itself engaged must be honestly understood to be effectively fought.

Of course, these EU demands for censorship of the British media illustrate precisely why the Brexit vote went the way it did.

Reclaiming British sovereignty was at the very heart of the matter for British voters. In case they needed reassurance that the decision to leave the EU was the right one, this report should settle the matter.