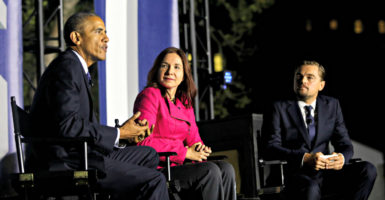 President Barack Obama, joined by actor Leonardo DiCaprio at the White House, warned Monday night that the world is running out of time to counter climate change and the U.S. government must make laggards “pay a penalty.”

“It takes time to ramp up these new energy sources, and we are in a battle against time,” Obama said. “The best way we can spur that kind of innovation is to either create regulation that says, ‘Figure it out and if you don’t figure it out then you’re going to pay a penalty,’ or to create something like a carbon tax which gives an economic incentive for businesses to do this.”

DiCaprio dismissed those who don’t “believe” in climate change as also nonbelievers “in facts or in science or in empirical truths” who “should not be allowed to hold public office.”

Obama said the climate issue should have crossover appeal to conservative Americans, including people of faith and gun owners.

“They are generally on the conservative side of the spectrum, but care deeply about this planet that God made,” Obama said.

“It requires us to reach out to sportsmen and hunters and fishermen who may not agree at all on Second Amendment issues but they sure like and understand the notion that they’ve got a forest where they can go out—although they probably don’t want to be mauled by a grizzly bear.”

“If you do not believe in climate change, you … should not be allowed to hold public office,” @LeoDiCaprio says.

In DiCaprio’s Oscar-winning role in “The Revenant,” he is attacked by a bear.

DiCaprio was at the White House event, dubbed “South by South Lawn,” to premiere his climate change documentary film “Before the Flood.” Katharine Hayhoe, a climate scientist at Texas Tech University, joined the president and the actor for a panel discussion.

The problem with such passion is that too few—including actors and politicians—consider the consequences of climate policies, said Marlo Lewis, a senior fellow at the Competitive Enterprise Institute.

“I like Leonardo DiCaprio as an actor. He seems like a great guy to have a beer with, but there is much he is not hearing from his conversations with Obama,” Lewis told The Daily Signal. “He thinks only climate change is a threat, but isn’t thinking about the threat of climate policy. To say we are going to bear any burden, pay any price, he doesn’t realize the cure can be worse than the disease.”

Lewis said poverty, not climate change, is the largest cause of preventable illnesses and premature death.  And, he said, fossil fuels have provided more energy and more food by making agriculture more efficient.

About 1.3 billion people in the world have no electricity, Lewis said, so energy should be made more plentiful and available.

The Obama administration’s entry into the Paris climate agreement clearly violated what the Constitution considers a treaty that must be ratified by the Senate, he said:

The Obama administration has called this the most ambitious agreement in history and it is. Other countries are talking about ratification. Obama does not want to use the R-word, ratification, because it would mean it’s the T-word, treaty.

In April, the United States signed on to the Paris Agreement, which requires the the U.S. to cut greenhouse gas emissions to 2005 levels by 2025, which would be a reduction of 26 percent to 28 percent.

“Now, not every country is doing the exact same thing because not every country produces the same amount of carbon dioxide and greenhouse gases per capita. … The good news about the Paris Agreement is that it committed everybody to do something,” Obama said during the panel discussion, adding:

India will not be making the same sacrifices in limiting carbon dioxide emissions under the Paris Agreement as the United States, said Nicolas Loris, a research fellow on energy and the environment at The Heritage Foundation.

“India’s end of the commitment won’t force it to cut economic growth,” Loris told The Daily Signal. “They are cutting carbon intensity rather than CO2 emissions. It would be a ratio of carbon to the GDP [gross domestic product].  It will be business as usual without restrictions on coal-fired power plants in India.”

China likewise is not making the same sacrifices as the United States, he said.

“Obama will hail this agreement as a huge success,” Loris said. “I wouldn’t call it an economic or an environmental success. It will increase energy costs disproportionately on the poor.”

How much man’s activity contributes to global warming has been a contentious issue during Obama’s two terms. While the administration and many scientists call for sweeping government action to limit what they view as catastrophic climate change, other scientists and business leaders contend that humans’ role and its results aren’t certain.

Anthony Sadar, a certified consulting meteorologist and author of “In Global Warming We Trust: Too Big to Fail,” contends the Paris Agreement could be used by other nations to gain a political and financial advantage over the United States.

“India and China would love to see the U.S. drawn up into climate policy because it would take their attention away from the imbalance in trade,” Sadar told The Daily Signal in a phone interview.

“They like to hype this issue up with celebrities like DiCaprio, and what does he know?” Sadar said. “Science is a discipline. Politicians and actors are pushing a scientific issue, something of which they apparently have little knowledge.”