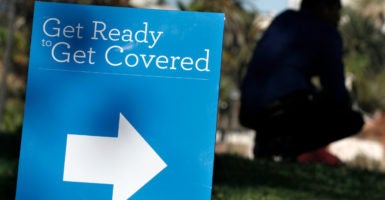 Since 2014, HHS has been illegally sending billions of “reinsurance” fees to insurance companies instead of sending those dollars to the United States Treasury where they belong. (Photo: Jonathan Alcorn/Reuters/Newscom)

When President Barack Obama made his case to the American people for Obamacare, he promised that it would both lower health insurance premiums and not add to the national debt.

Neither has been true.

One way Obamacare has been adding to the deficit is through illegal bailouts of insurance companies operating Obamacare plans through the Department of Health and Human Services.

The Government Accountability Office highlighted one bailout scheme last week when it released a report finding that since 2014, HHS has been illegally sending billions of “reinsurance” fees to insurance companies instead of sending those dollars to the United States Treasury where they belong.

But that isn’t the only way the Obama administration is plotting to illegally funnel your money to insurance companies.

A separate “risk corridor” program also promised Obamacare insurance companies a safety net if their customers used an unexpectedly high amount of health care. The way it was supposed to work was that those plans with low medical costs would pay into a fund and plans with high medical costs would take out of the fund. In theory, the fund was supposed to be deficit neutral.

But in reality far more plans experienced higher costs than they anticipated, leaving HHS with billions in claims from insurance companies but no way to pay them. The Obama administration has asked Congress to appropriate money to bail out these insurance companies, but Congress has rightly refused.

So now HHS is getting creative. On Sept. 9, HHS issued a memorandum addressing suits filed by insurance companies in federal court demanding risk corridor payments. HHS wrote that, “as in all cases where there is litigation risk, we are open to discussing resolution of those claims,” and that “we are willing to begin such discussions at any time.”

This language appears to suggest that HHS may be trying to illegally funnel money to Obamacare insurers through the Department of Justice’s Judgment Fund. In other words, since Congress has not appropriated money for nonbudget neutral risk corridor payments, HHS will just invite insurance companies to sue, and then the DOJ can pay the bill instead.

Last week, Sens. Marco Rubio, R-Fla.; Ben Sasse, R-Neb.; John Barrasso, R-Wyo.; and I wrote a letter to the DOJ and HHS to make sure that doesn’t happen. Our letter notes that the Congressional Research Service has already found that the Judgment Fund may not be used to settle risk corridor claims and asks HHS to identify how it plans to pay the risk corridor settlements mentioned in their Sept. 9 letter.