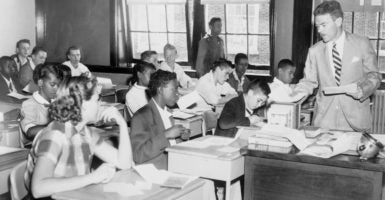 Now the NAACP, which fought so hard for us to get the education we deserved in the '60s, is trying to make it harder for parents to make the same decisions our parents did then on behalf of their children. (Photo: Everett Collection/Newscom)

Thanks to a lawsuit, over 92,000 kids, many of them children of color, from low-income families are at risk to lose their privately funded scholarships to attend the private schools of their choice.

And to add insult to injury, the NAACP is one of the plaintiffs in this lawsuit.

Last week, the Florida Education Association—the state’s largest teachers’ union—along with the Florida NAACP and other plaintiffs made a third attempt to challenge Florida’s tuition tax credit scholarship program, which allows individuals and companies to receive tax credits if they donate to a scholarship fund that helps low-income students attend the school of their choice.

After losing in trial court and then again in the 1st District Court of Appeals, the Florida Education Association and NAACP, along with other parties, appealed to the state Supreme Court on Sept. 14. Their lawsuit challenges the constitutionality of the 15-year-old education choice program.

In January, over 10,000 people rallied in Tallahassee, Florida, in support of the scholarship program and heard Martin Luther King III declare that this fight “is about freedom—the freedom to choose for your family and your child.”

The NAACP, which was started to support the rights of black people, is now taking a position that, in my opinion, only hurts black children and other children of color’s chance of getting a quality education in this country through access to school choice. Involving itself in lawsuits against the Florida Tax Credit Scholarship Program seems counter to their mission.

I have been involved in advocating for school choice for the last 20 years and I still don’t understand why anyone, especially the NAACP, would oppose families having a choice in education.

In January, over 10,000 people rallied in support of the scholarship program and heard Martin Luther King III declare that this fight “is about freedom—the freedom to choose for your family and your child.”

As a young mother raising kids in Washington, D.C., when I found my son failing in school and honestly needing to be in a different kind of educational environment, I had no choice but to continue sending him to a public school that was not in his best interest. Had it not been for the generosity of a neighbor who saw something special in my son and provided a scholarship for him to attend a school that better met his needs, I shudder to think where my son would be now.

Because of that scholarship, he was able to be successful and graduate and move forward with his life.  This is what I’ve seen over the years with the children who have had access to school choice, including public charter schools and private and public scholarship programs like the tuition tax credit scholarship program in Florida.

I’ve watched them succeed when most people expected them to fail. I’ve seen children go on to college when this possibility had never even been discussed with them. I’ve seen entire communities come out and support the families whose children were thriving in schools that their parents chose. It’s been incredible seeing low-income families obtaining the American dream because their children were able to obtain a quality education.

My cousin Rev. Joseph C. Crenchaw was a civil rights leader with the NAACP and the president of the Little Rock, Arkansas, chapter during the Little Rock Central High School crisis in the ’60s—a crisis about children of color having access to equal, quality education. My father, William Harry Fowler, was the first black assistant superintendent of the Little Rock School District and a member of the NAACP.

Both my cousin and my father were adamant about making sure black children were able to receive the best education possible. I was a beneficiary of that fight and attended Little Rock Central High School myself and know that it made a difference in my life and the lives of my classmates.

But now the NAACP, who fought so hard for us to get the education we deserved in the ’60s, is trying to make it harder for parents to make the same decisions our parents did then on behalf of their children.

Threats to school choice options like the Florida tuition tax credit scholarship program create unnecessary limitations for families who can’t get access to quality education simply because they live in the “wrong ZIP code” or don’t have resources to attend quality private schools.

This is exactly why I, and so many others, continue to fight for school choice options. When I look at the changes in the lives of the families I serve, I know that I will continue to do whatever I can do to empower them to determine the direction of their children’s future.

My hope is that the NAACP and other leaders in the African-American community who support these lawsuits in Florida will spend a moment talking to the parents and children who have been touched by school choice.