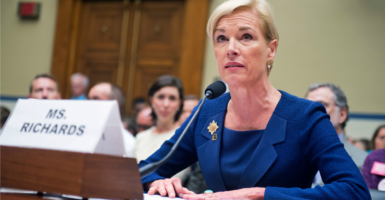 Planned Parenthood has once again proven it does two things exceedingly well—ending innocent human lives in the womb for a fee, and getting American taxpayers to subsidize its operations.

How else to explain Congress making America’s No. 1 abortion provider eligible for new funding when it already gets over a half-billion dollars (yes, billion) in taxpayer money per year?

The House version of the continuing resolution, a short-term government spending measure, provided $95 million in health care funds to address the Zika emergency. But it effectively limited grant recipients to Medicaid providers in Florida and Puerto Rico.

This meant that Planned Parenthood clinics in Florida would have been guaranteed funding, but its Puerto Rico partner, Profamilia, would not because it did not qualify under Medicaid rules.

This was unacceptable to congressional Democrats who threatened a shutdown fight over this one abortion provider that runs six clinics. The subsequent Senate version of the continuing resolution dropped the Medicaid requirement and allows Profamilia access to Zika funds,  but seems to leave the question of who ultimately gets funding in the hands of Florida and Puerto Rico health authorities.

Because Florida cut off Planned Parenthood funding under Medicaid this year (only to be overturned by a liberal judge), there is at least some hope that it will direct all Zika funds to life-affirming health centers instead of abortion clinics.

But Puerto Rico? The place that once boasted of the highest female sterilization rate in the world because of the coercive teamwork between Planned Parenthood and the Puerto Rican government? We already know Planned Parenthood and its allies are willing to hold emergency Zika funding hostage over a handful of clinics, so it would be the height of naïveté to think that the master of working the system would not find a way to get its typical cut of the money if given the chance.

Instead of allowing Planned Parenthood access to new federal funding streams, Congress should be closing the spigot entirely. For example, when videos of alleged corruption and illegal voter fraud surfaced around the notorious left-wing group known as ACORN, Congress promptly defunded it. The same logic applies to Planned Parenthood, especially after undercover videos raised serious questions over whether its affiliates were illegally profiting from selling organs of unborn babies.

Thankfully, we still have landmark laws like the Hyde Amendment that prevent direct taxpayer funding of abortion. But while Planned Parenthood fights for Hyde’s repeal, it has used every trick in the book to get federal money by trying to pretend that its core business is anything but industrial-scale abortion.