California Could Let Felons Behind Bars Vote, Despite What the State Constitution Says 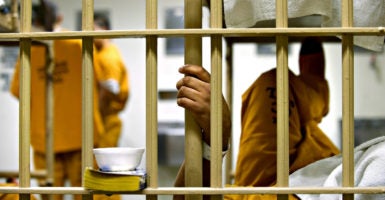 California Gov. Jerry Brown is considering whether to sign a bill that would allow tens of thousands of incarcerated felons to vote, while continuing to deny the vote to others.

The Legislature sent a bill to Brown’s desk that would restore voting rights to an estimated 50,000 convicted felons who are behind bars in county jails, but not to felons who are serving their sentence in prisons.

The legislation is a means to get around the language of the state constitution, which specifies:

The Legislature shall prohibit improper practices that affect elections and shall provide for the disqualification of electors while mentally incompetent or imprisoned or on parole for the conviction of a felony.

In 1976, California voters approved an amendment to the constitution to restore voting rights to felons so long as they are not still “imprisoned or on parole.”

In 2011, Brown, a Democrat, signed the Realignment Act, which empowered officials to move low-level offenders to county jails as a way to address overcrowding in the state’s prisons.

The stated goal of the legislation on Brown’s desk was to clarify the distinction between voting rights for felons in prison and those serving in county jails, something left murky by a 2014 court ruling.

Supporters contend that the word “imprisoned” in the California Constitution refers to a state prison, but not a county jail.

If Brown signs the bill, he would add 50,000 felons to the voter rolls, according to the American Civil Liberties Union of California. The state has 123 county jails.

The governor’s office would not say whether Brown will sign the bill.

“Generally, we do not comment on pending legislation. The governor has until September 30 to act on the legislation and when he does so we will issue a news release and post on our website,” Brown spokesman Gareth Lacy told The Daily Signal in an email.

If the bill becomes law, it would create an odd circumstance in which inmates out of prison on parole are prohibited from voting, but felons behind bars in county jails could vote, said Cory Salzillo, legislative director for the California State Sheriffs’ Association, which represents 58 county sheriffs.

“We think that it’s appropriate to keep felons from voting while they are incarcerated,” Salzillo told The Daily Signal in a phone interview. “Our notion is that it’s a consequence of being incarcerated. Society has said for a certain period of time you are precluded from participating in certain aspects of civic life.”

“While national attention is focused on a few states, many fail to realize that in California voters of color have suffered new restrictions on their right to vote in recent years,” Weber said in prepared remarks. “I wrote AB 2466 because I want to send a message to the nation that California will not stand for discrimination in voting.”

California Attorney General Kamala Harris asserted her support, saying in a formal statement:  “The right to vote is fundamental to our democracy and society, and yet for too long we have stripped certain individuals of that right.”

If Brown signs it into law, the measure also would guarantee that juvenile offenders retain their right to vote when they turn 18 if they committed a delinquent felony offense, according to a “fact sheet” from Weber’s office. It also would clarify information that courts send to election offices, to ensure eligible voters aren’t denied the right to vote by mistake.

But the controversy is over what Weber’s office describes as the provision of  the bill  that “defines the term ‘imprisoned’ for purposes of voting as a state-prison or federal-prison sentence.”

To differentiate prisons and jails regarding voting rights would be splitting hairs, said Hans von Spakovsky, a senior legal fellow at The Heritage Foundation who specializes in election-related issues.

“If you look at the state constitution, you would have a hard time believing that jails and prisons aren’t the same intent,” he told The Daily Signal. “If the governor signs the bill, any voter in the state will have a cause of action [to sue the state]. If the state is taking action in diluting an individual’s vote, it is easy to get standing.”

Earlier this year, Virginia Gov. Terry McAuliffe, a Democrat, took executive action to restore voting rights to felons after they are released.

Only Maine and Vermont allow felons to vote even while serving their sentence in state prisons. If Brown signs the measure, California would not be going as far as those New England states in granting inmates the right to vote.

In a formal statement, Lori Shellenberger, director of the ACLU of California’s Voting Rights Project, said:

The Legislature’s vote demonstrates that our elected officials want to be on the right side of history and end this insidious form of voter discrimination. It’s also a vote for public safety. When we allow people to exercise their civic duty to participate in our elections we reduce their chances of re-offending and make our communities safer.

Massachusetts used to allow felons to vote from behind bars, von Spakovsky said. However, after inmates formed a political action committee to influence legislators, voters overwhelmingly approved a constitutional amendment to ban felons from voting while incarcerated.

Nationally, 38 states and the District of Columbia allow most ex-felons to regain voting rights after completing their sentence, according to the National Conference of State Legislatures. Some of these states restore rights automatically, others either require felons to wait or apply to have their rights restored.