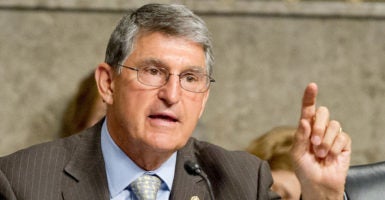 Sen. Joe Manchin should call the Miners Protection Act what it is: a taxpayer-financed bailout for one particular union-run pension plan. (Photo: Ron Sachs/CNP/ Polaris/Newscom)

In a Sept. 14 speech on the Senate floor, Sen. Joe Manchin, D-W.Va., called on his colleagues to honor a historical promise that simply doesn’t exist.

In his effort to conjure up support for a taxpayer-financed bailout of a particular union-run pension plan—the United Mine Workers of America (UMWA)—Manchin urged lawmakers to pass legislation that “fulfills the commitment and promise we made starting back to 1946.”

Manchin wants support for S.1714, the Miners Protection Act, which would pay out as much as $490 million annually to the UMWA pension plan. Currently, UMWA is dealing with approximately $5.6 billion in pension promises it can’t fund. Supporters of a government-backed bailout argue taxpayer support is necessary to keep a promise government made to the UMWA 80 years ago.

The problem is, there was no such “commitment” or “promise”—at least not one that extended beyond 1947.

What Manchin referred to was actually only a temporary agreement covering the terms of employment in the mines during a one-year period of government control. The 1946 Krug-Lewis agreement (signed by then-Secretary of the Interior Julius Krug and then-UMWA President John L. Lewis) ended in 1947 when the mines were returned to their owners.

While the Krug-Lewis agreement helped establish a welfare and retirement fund that evolved over the following six decades to include the UMWA’s most recent pension plan, it specifically excluded the government from having any control over or liability to the plan.

As the Krug-Lewis agreement clearly states, the plan’s “trustees shall have full authority with respect to questions of coverage and eligibility, priorities among classes of benefits, amounts of benefits, methods of providing or arranging for provisions of benefits and all related matters.”

Manchin and the many other policymakers who support the Miners Protection Act (or the House’s companion bill, H.R. 2403) should call it what it is: a taxpayer-financed bailout for one particular union-run pension plan that has promised $5.6 billion more in pension benefits than it can afford to pay.

Unless policymakers want to pick winners and losers among the 1,300 other union-run pension plans that have cumulatively promised over $600 billion more than they can afford to pay, they should oppose any and all pension bailouts.