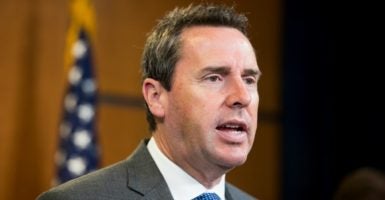 The chair of the Republican Study Committee, the largest conservative caucus in Congress, is up for grabs and Rep. Mark Walker, R-N.C., is the first to announce he's gunning for the job. (Photo: Bill Clark/CQ Roll Call)

As members of Congress returned to Capitol Hill Tuesday, Rep. Mark Walker, R-N.C., announced his bid to become the next chairman of the Republican Study Committee. The first candidate out of the gate, Walker is uncontested and off to an early lead.

The race comes as the chasm between Republican leadership and the party’s right flank expands in Congress. As a result, the next RSC chairman will be well positioned to determine whether the caucus throws its weight behind leadership or serves as a conservative counterweight.

If he’s at the helm of the 176-member caucus, Walker has indicated he plans to steer RSC and the rest of the Republican conference to the right.

In a “Dear Colleague” letter circulated Tuesday and obtained by The Daily Signal, Walker wrote that the RSC can work to unite Republicans “to stop a liberal agenda or an erosion of our party’s conservative identity.”

“I believe there has never been a better time for a bold, conservative vision for America,” Walker wrote. “I am also convinced that the Republican Study Committee is uniquely positioned and fully capable to deliver that vision and jumpstart a conservative revival.”

Though Walker announced his bid formally Tuesday, he’s been building support inside the GOP conference for months. An aggressive whipping operation has already enticed one early endorsement and more have been promised according to a Walker aide.

Once a rumored contender for the position, Rep. Andy Barr, R-Ky., has become an early supporter.

A Barr aide told The Daily Signal that he plans to endorse Walker for the position because he shares “Walker’s vision for the RSC as an intellectual and ideological force in the Republican conference.”

Something of a conservative darling in the Republican circles, Walker has become popular with both the establishment and rabble-rousers on the right.

The North Carolina freshman has won accolades from House Speaker Paul Ryan for his work on alleviating poverty. And he’s also earned—but declined—invitations to join the House Freedom Caucus.

Walker would succeed Rep. Bill Flores, R-Texas. Under the Texan’s leadership, the Republican Study Committee has spearheaded the conservative position in a number of debates. The coalition has even beat the ultra-conservative Freedom Caucus to the punch, staking out positions well to the right of leadership.

The Republican Study Committee was the first to call on Ryan to scrap a $1.07 trillion spending package that his predecessor, House Speaker John Boehner, negotiated with President Barack Obama.