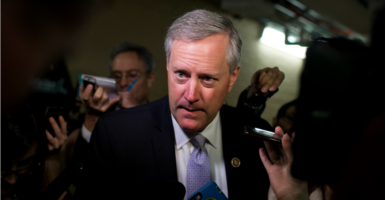 Members of the Freedom Caucus might be going their own way soon. (Photo: Tom Williams/CQ Roll Call/Newscom)

While away from Washington on August recess, House Freedom Caucus members are rethinking their relationship with the Republican Study Committee. Some are considering whether to call it quits and cancel their membership.

Rep. Mark Meadows, R-N.C., confirmed the possibility of the breakup, telling The Daily Signal that as many as 20 members could allow their committee memberships to lapse.

“There’s no big policy disagreement or major falling out as much as there is just a logistical concern,” said Meadows, a founding member of the Freedom Caucus. “It’s just become a function of how much are you going to invest in one group or the other.”

Any breakup with the Republican Study Committee could amount to a significant shake-up in Congress. Though two distinct groups, the organizations share many of the same members, often tag-team major policy fights, and make up the majority of House Republicans together.

Rep. Mick Mulvaney, R-S.C., told The Daily Signal, “I’m not re-upping, but that is simply a reflection of where I spend my time.”

A founding member of the Freedom Caucus, Mulvaney lost a competitive race to become RSC chairman two years ago. But he complimented the work of his former opponent, RSC Chairman Bill Flores, R-Texas, on standing up to GOP leadership.

The ranks of the RSC include 176 members, making it the largest caucus in Congress. And the group uses that size to quietly leverage support for its conservative policy proposals.

The more nimble 40-member Freedom Caucus, however, is much more likely to publicly clash with leadership in an effort to move the party to the right.

The Republican Study Committee roster has ebbed and waned over the course of its 40-year history, but the current membership drama has taken on increased significance in light of the Nov. 17 chairman election.

Before voting in that contest, representatives must decide whether or not to renew their RSC membership by paying $5,000 in annual dues.

“I’ve heard of no mass exodus,” a GOP aide said, “just a few members here and there who don’t feel they use the resources [RSC] provides often enough to justify paying the dues.”

The right candidate for RSC chairman could change that dynamic though, the aide speculated. “I’d imagine a Chairman Andy Harris would make HFC folks more likely to stick around.”

Harris, a Maryland Republican, is a potential candidate for RSC chairman, according to multiple Capitol Hill sources. He has remained tight-lipped about his plans, however. Harris’ office did not respond to multiple requests by email and phone from The Daily Signal.

The race for RSC chairman will officially be decided after the November election, but members have been talking about it at least since July when Flores announced this year’s process. When lawmakers return in September, interested candidates will meet with the study committee’s founders. Because the House is in recess all of October and most of November, that only leaves next month for campaigning.

No congressmen have declared their candidacy officially, but a senior GOP aide told The Daily Signal that both Harris and Rep. Mark Walker, R-N.C., are building support inside the caucus for a bid.

An aide in Walker’s office told The Daily Signal that the North Carolina freshman is “definitely looking into” the possibility, adding that the office “is doing the groundwork to be prepared for the fall.”