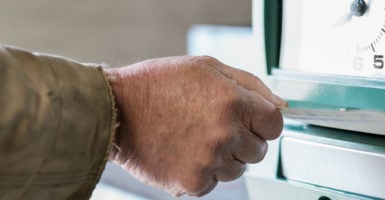 The overtime rule is unlikely to raise average wages as employers will reduce base pay or shift employees to hourly pay. (Photo: Jetta Productions Blend Images/Newscom)

In an alleged attempt to increase the income of certain salaried employees, the Obama administration issued a new overtime rule, set to take effect Dec. 1, that will almost certainly do more harm than good for the employees it seeks to help.

Currently, employers only have to pay the overtime time-and-a-half rate to salaried employees who make less than $23,660 per year (as well as some who make more but don’t have sufficiently advanced job duties). The new rule more than doubles the pay level subject to overtime to $47,476.

This effectively means that many salaried employees can’t be paid to get a job done, but must instead be paid based on their hours.

Beginning in December, employees who make less than $47,767 a year must keep track of their hours and their employer must pay them time-and-a-half for any work over 40 hours per week.

Seems like it could benefit employees through higher pay, right? That’s what the Obama administration thinks. It claimed the rule will increase pay by an average of $1.2 billion per year across roughly 4.2 million workers (an extra $285 per worker).

But that assumption defies the economic literature. It effectively assumes employers have an extra $1.2 billion in spare change that they can dole out to employees without consequence.

Employees are likely to lose desired job flexibility and income dependability, and will likely have no additional income (maybe even less) to show for it.

Even left-leaning economists Jared Bernstein and Ross Eisenbrey acknowledge that’s not the case. They write that additional overtime costs “would ultimately be borne by workers as employers set base wages taking expected overtime pay into account.”

Another option for keeping total costs constant is to shift employees to hourly rates.

In the end, employees are likely to lose desired job flexibility and income dependability, and will likely have no additional income (maybe even less) to show for it:

Rather than intervene in mutually advantageous salary arrangements between employers and employees, the government should let employees agree to be paid to get a job done. The Obama administration’s paternalistic approach will ultimately hurt the employees it aims to help by limiting job flexibility, reducing income certainty, and potentially reducing incomes through excessive compliance costs.