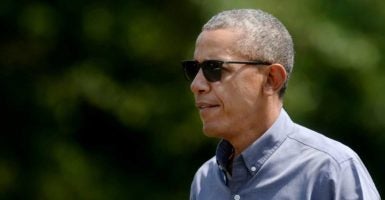 Instead of accepting the will of Congress, Obama has chosen to raise the death tax on his own. (Photo: Polaris/Newscom)

President Barack Obama isn’t afraid to enact his agenda over the will of Congress. At this late stage in his presidency, he’s still overreaching his authority to push through an agenda; his most recent overstep being an effort to unilaterally raise the federal estate tax.

Conservatives have successfully lessened the impact of the estate tax, colloquially known as the “death tax,” in recent years. In 2000, before George W. Bush became president, the death tax had a rate of 55 percent and struck families with assets valued at $675,000 or more.

Today, because of the 2001 and 2003 Bush tax cuts, the rate is down to 45 percent and only estates worth over $10 million face the tax. This is a victory conservatives should be proud of.

Of course, there are no permanent victories in Washington, especially when it comes to tax policy. Raising the death tax is a perpetual desire of liberals. They see this tax as a necessary tool to stop wealth from being concentrated among a few families.

Recently, the Treasury Department released regulations to limit the ability of families to use valuation discounts to reduce their death tax liability when a family member dies.

Valuation discounts make sense economically because they allow families to reduce the taxable value of an asset that does not have a deep and frequently-traded market. For instance, the owner of a family-owned business may pass on a $20 million business to his children. The IRS would assess the death tax on the $10 million value of the business (after the $10 million exemption).

However, that ignores the fact that the family cannot readily sell the business, or some of its assets, because there is no market for a portion of a family-owned enterprise. Valuation discounts allow families to reduce the value of the business to better reflect its lack of marketability.

The same thinking applies to the valuation of any asset. Those assets with deep and active markets will, all else equal, have higher prices than those with inactive markets.

The new IRS regulations would make it harder for family-owned businesses to use valuation discounts, and as a result, raise the death tax bills of families trying to hold onto their companies. This will destroy jobs as those businesses are broken up and slow the economy.

What liberals miss in the death tax debate is that the wealthiest people do not typically inherit their fortunes. They earn them. Think Bill Gates, Warren Buffett, and Mark Zuckerberg.

Furthermore, when the government taxes away half of what people accumulate during their lifetimes, it creates a powerful disincentive for families to build wealth. The death tax is a particularly potent scourge of family-owned businesses. These businesses are usually closely held and look valuable on paper because they often own many assets. However, small businesses generally lack liquid cash to pay their estate tax bill when the principal owner passes away, forcing the surviving family members to sell the business to pay the IRS.

The tax ends up becoming a deterrent for leading a successful life. That deterrent has a powerful negative impact on the economy. That is why there is also an incredibly strong economic argument for abolishing the death tax completely.

The public has 90 days to voice its opinion on the Treasury’s regulations and the administration’s unilateral action on this important issue. Americans should tell the Obama administration that they do not appreciate the effort to make it harder for a businesses to stay in the family after a loved one passes away.

Update: Rep. Warren Davidson, R-Ohio, recently introduced legislation to stop the Obama administration’s plan to unilaterally raise the death tax. The bill would protect family-owned businesses from higher death bills that could imperil the continuation of those businesses when the head of the family passes away.