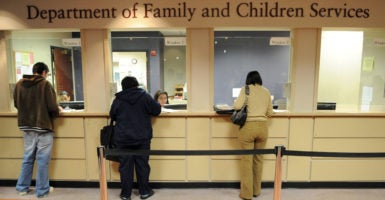 Alongside Kansas, Maine has been one of the leading states reforming welfare, and nearly half of the states have already taken action.

Maine Gov. Paul LePage, a Republican, made welfare reform a cornerstone of his gubernatorial campaign, and since taking office, the state reinstated work requirements for able-bodied adults without dependents on food stamps and put back in place a 60-month lifetime limit for those in the Temporary Assistance for Needy Families, or TANF, program.

Now, a new law places restrictions on what welfare recipients in the TANF program can spend their welfare funds on.

The government uses EBT cards to distribute welfare benefits. Not only can the cards be used at retail establishments, but a recipient can also use them to withdraw cash.

“Those who are abusing and misusing these benefits, it tarnishes the entire program and detracts from the value of the program for those who are using it appropriately to help themselves out of poverty,” Mary Mayhew, commissioner of the Maine Department of Health and Human Services, told The Daily Signal, continuing:

These are taxpayer-funded benefits. There should be expectations around how they are used and restrictions on how they cannot be used. We shouldn’t be allowing arguments around stigma to influence how these policies are designed.

State lawmakers have been debating this proposal to restrict welfare usage for several years, though LePage began pushing for these restrictions when he took office in 2011. The bill that passed in April and went into effect late last month was the result of a compromise between Republican state Sen. Eric Brakey and Democratic state Sen. Nate Libby.

Mayhew’s agency will also convene a working group to study how to block EBT cards from being used to buy prohibited items.

According to the Maine Department of Health and Human Services, there are currently less than 6,000 TANF cases in the state accounting for 13,000 people.

“This is commonsense reform,” Mayhew said of the prohibitions of specific items with TANF benefits. “If we turn a blind eye to the abuse and misuse of these benefits that allow someone to take what is intended to support vulnerable families with the purchase of basic necessities and allow them to use it to bail themselves out of jail, we are defeating the purpose for which these programs were established.”

At issue for Republicans and Democrats in the Maine Legislature was the severity of penalties for those caught abusing the welfare system.

“This bill finally gives Mainers what they’ve wanted: meaningful welfare reform that focuses assistance on helping families get out of poverty while ensuring accountability at the cash register,” Libby told the Bangor Daily News when his bill advanced in April.

Libby did not return The Daily Signal’s request for comment.

Josh Archambault, a senior fellow at the Foundation for Government Accountability, a nonpartisan think tank, said that nationally, the TANF program is small in size and cost compared to in the mid-1990s, when welfare reform passed.

Still, he said the public is “fed up” with abuse and fraud in the welfare system.

“Broadly speaking, the general public believes that welfare cash assistance should be temporary and for the most needy,” Archambault told The Daily Signal. He continued:

Any kind of spending that goes beyond the basics, paying for rent or gas or food, the basics of life, I think the general public is just fed up.

Archambault said laws restricting what can be purchased using welfare benefits help to restore trust in the system.

“The rule sends a message to enrollees about what is permissible, but also that success means that you’re on the program temporarily,” Archambault said. “It also sends a message to taxpayers that state policymakers are finally trying to rein in some of the waste and abuse in the system.”

Today, more than half of the states have taken action to put prohibitions in place regarding how TANF cash benefits are used. But these policies have been criticized for increasing child homelessness.

“This proposal may make for eye-catching headlines and popular politics, but it does nothing to improve the lives of children and families living on the edge,” the group said.

Mayhew, commissioner of the Maine Department of Health and Human Services, said it’s difficult to predict how much money the state will save by placing restrictions on what can be bought using welfare funds since that involves tracking cash benefits withdrawn.

But she said her agency is working on ways to tighten oversight and transparency around TANF transactions.

“What we know is that $1 spent on a lottery ticket is a dollar taken away from a needy child,” she said. “And that is at the heart of our efforts. When we can ensure the integrity of the program and that money is being spent appropriately, we can do a better job helping to support these vulnerable families and get them on the right pathway.”

Over the last few years, many states have been quick to act on implementing policies that restrict what can be purchased using welfare funds.

States had until 2014 to act, and so far, nearly all of the 37 states that issue TANF benefits have enacted laws or policies to codify these restrictions.

At least 25 states, including Maine, prohibit welfare recipients from using their EBT cards to pay for alcohol, tobacco, gambling, lottery tickets, guns, or adult venues, according to the National Conference of State Legislatures.

In Texas, welfare funds can only be used to purchase “goods and services that are considered essential and necessary for the welfare of the family,” which includes food, clothes, housing, utilities, child care, transportation, and medical needs, according to state law.

Arkansas attempted to implement a policy similar to Texas’ regarding residents participating in the TANF program, requesting a waiver from the federal government that would not only limit purchases to items “essential and necessary,” but also restrict cash withdrawals from EBT cards.

The Department of Health and Human Services, though, denied the state’s request last month.