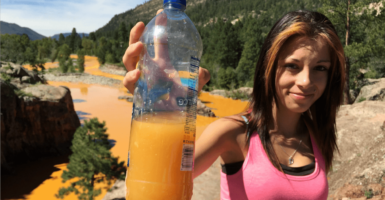 In this 2015 photo, Rayna Willhite holds a bottle of water she collected from the Animas River, which was carrying mine waste from the Gold King Mine. (Photo: Jerry McBride/The Durango Herald / Polaris/Newscom)

One year has passed since the Environmental Protection Agency caused a discharge of 3 million gallons of toxic water into the Animas River, and no one has been held accountable, although private parties have been criminally prosecuted under similar circumstances in the past.

Now, three entities’ actions might change the resulting narrative that there are two sets of rules, one for people in the private sector, and another for employees of the federal government.

The EPA’s spill has been disastrous for millions of people in Colorado, Utah, New Mexico, and Southern California, who rely on affected waters—contaminated with arsenic, lead mercury, and other toxic metals—for drinking, irrigation, recreation, and employment.  It was reported that at a public comment session shortly after the spill, David Moler, owner of a river-rafting company, asked EPA Regional Director Shaun McGrath, “When can my business be open again?” and “What should I tell my employees?”

The attorney general of the Navajo Nation, Ethel Branch, told CNN that the affected San Juan River “has always been a source of life, of purification, and of healing” for the Navajo, but “now it’s been transformed into something that’s a threat. It’s been pretty traumatic in changing the role of the river in the lives of the people who rely on it.”

Branch says that the full extent of the health concerns caused by the spill may be unclear “for five to 10 years—maybe more,” but people are concerned today about the potential harms from direct exposure, “eating food that’s been watered with contaminated water, or eating livestock that has consumed the water.” As a result, some irrigation ditches were closed, “leaving farmers with bone-dry land and dead crops,” according to The Denver Post

A year ago, Jonathan Nez, vice president of the Navajo Nation, asked, per The Denver Post, “What’s going to happen when people find out that the cattle they’re being sold is from this region? It could really devastate ranchers here.” Timothy Coleman, whose family has farmed land along the river for years, said, also according to the Post, “I guess I’ll do something else.”

The Navajo Nation’s lawsuit claims that the EPA “failed to prepare for known risks of a mine blowout;” that workers for the EPA “‘recklessly’ burrowed into the Gold King Mine;” and that the agency has responded to the nation’s requests to provide compensation for the economic and environmental harms of the spill “with resistance, delays, and second-guessing.”

The EPA commissioned a report on the spill from the Department of the Interior’s Bureau of Reclamation, which was released last October. That report stated that an EPA backhoe operator hit a spring, causing the spill, but the report did not say who was responsible or why that happened.

The EPA later issued a second report, which claims that after some “careful scraping and excavation” with a backhoe, workers “noticed a water spout a couple of feet high in the air near where they had been excavating.”

Whether EPA employees “noticed” a “water spout” or they violated federal law by causing a 3,000,000 gallon discharge into surrounding waters is now the subject of three separate legal actions. Hopefully, we will soon learn whether the EPA violated the law in its handling of the Gold King Mine.