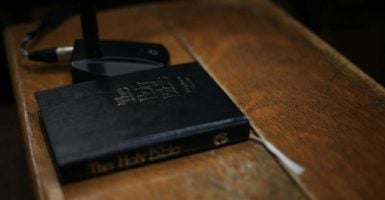 Judge Wayne Mack, a justice of the peace in Montgomery County, Texas, recalls several people  telling him they were initially worried about coming before his court, but after the chaplain’s prayer opened the proceedings, they felt better.

“It was clear it would be a solemn event and they knew I would be fair,” Mack told The Daily Signal in a phone interview a day after the Texas attorney general’s opinion held that opening court with a chaplain’s prayer and the voluntary chaplain program Mack established were constitutional.

Mack started a voluntary chaplaincy program that has more than 60 clergymen participating, including Christians, Jews, Hindus, and people of other faiths. It openly invites, “all religious leaders of any faith in to participate.”

As a justice of the peace, Mack also serves as the coroner for the Montgomery County. It was in this duty that he first implemented the voluntary chaplain program, after finding himself not always able to console people when he had to be first on the scene for deaths.

In a six-page opinion issued Monday, Texas Attorney General Ken Paxton noted the 2014 U.S. Supreme Court ruling in the case of Town of Greece v. Galloway, which determined that initiating local government meetings with prayer did not violate the Establishment Clause of the Constitution. The Establishment Clause of the Constitution states, “Congress shall make no law respecting an establishment of religion, or prohibiting the free exercise thereof … ”

Paxton compared Mack’s courtroom with the Town of Greece, New York, writing, “In both instances, religious leaders of any faith are invited to deliver a prayer at the beginning of proceedings.”

“A court would likely conclude that a justice of the peace’s practice of opening daily court proceedings with a prayer by a volunteer chaplain as you describe is sufficiently similar to the facts in Galloway such that the practice does not violate the Establishment Clause,” the opinion reads.

He added, “A court would likely conclude that the volunteer chaplain program you describe, which allows religious leaders to provide counseling to individuals in distress upon request, does not violate the Establishment Clause.”

“Courts in other jurisdictions have likewise upheld the hiring of chaplains by a county hospital, prisons, and military establishments in order to provide counseling and guidance to individuals who request it,” the opinion said.

It added, “In each of these cases, the chaplains were paid by public funds, creating more significant Establishment Clause concerns than exist here, where the chaplains serve on a voluntary basis without cost to the taxpayer and only upon request of those who wish to receive the chaplain’s assistance.”

The Wisconsin-based Freedom From Religion Foundation isn’t happy with the opinion, but asserts that the matter is likely over because two individuals who regularly appear before the court felt “fearful” about how Mack would judge their case and are not willing to file a suit.

“We are confident that if we could bring this [case] before a federal judge, we could prove this far exceeds precedent, but we can’t do that without a plaintiff willing to challenge Judge Mack,” said Sam Grover, staff attorney for the Freedom From Religion Foundation, in a phone interview with The Daily Signal.

There was never an intent to offend anyone, and whether someone participated in the courtroom prayer would have no affect on the ruling, Mack said.

The Texas attorney general’s opinion marks a decisive victory for Mack, after getting a mixed victory before the Texas State Commission on Judicial Conduct, based on the Freedom From Religion Foundation complaint from 2014. The judicial commission dismissed the complaint, but “strongly cautioned” against the chaplain program and prayer.

But the commission ruling that offered neither discipline nor a mandate to stop, led Mack and First Liberty Institute, a religious freedom advocacy group that represents the judge, to seek more clarity. In February, Texas Lt. Gov. Dan Patrick asked Paxton to issue a clarifying opinion on the constitutionality of the case.

“The attorney general’s opinion is clear and sound constitutionally,” Mack said. “It emboldens believers of any faith to stand up for the First Amendment because it’s the First Amendment for a reason. The tyranny of political correctness is causing people to step away from their values. They should stand up and be counted.”

“This is a total victory for Judge Mack and for the citizens of Texas,” Shackelford said in a statement. “If the Supreme Courts of the United States and Texas can open with prayer, clearly, the law allows for Judge Mack’s court to open with an invocation by a volunteer chaplain. We are grateful Attorney General Paxton has brought clarity to this important issue, reaffirming the constitutionality of prayer in the public arena.”

However, Grover of the Freedom From Religion Foundation contends that Paxton did not address the group’s main points from a letter sent in April.

“None of the points we raised were addressed. The opinion barely scratches the surface,” Grover said. “This far exceeds the ceremonial acknowledgment of a deity to open of the the Supreme Court or the Texas Supreme Court.”

“It makes the violation less severe, but a prayer in any setting, any prayer of any religion leaves out a large segment of nonreligious people,” Grover said.