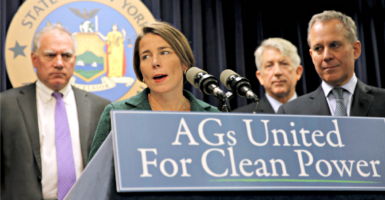 The deadline for New York Attorney General Eric Schneiderman, Massachusetts Attorney General Maura Healey, and eight environmental organizations to comply with subpoenas from the House Committee on Science, Space, and Technology came and went July 27 without their producing requested documents.

In an email to The Daily Signal, a committee aide wrote that “we’re talking with the recipients [of the subpoenas], and we’ll consider all of our options.”

As The Daily Signal previously reported, the House committee has the option to send a “contempt of Congress” finding to the full House.

The committee is disappointed that the New York and Massachusetts attorneys general and the environmental activist organizations behind the AGs’ efforts have refused to comply with lawfully issued subpoenas. Their noncompliance only raises additional questions. As discussions with the individual subpoena recipients move forward, the committee will consider using all tools at its disposal to further its investigation.

New York’s Schneiderman and Massachusetts’ Healey are part of a coalition of 17 state attorneys general who joined forces to coordinate investigations of individuals who express skepticism toward the idea of man-made global warming, or climate change.

Schneiderman’s office has said the public officials are looking at conventional energy companies such as Exxon Mobil Corp.

“The participating states are exploring working together on key climate change-related initiatives, such as ongoing and potential investigations into whether fossil fuel companies misled investors and the public on the impact of climate change on their businesses,” the New York attorney general’s office said in a release.

Some political figures and academics have suggested pursuing charges against scientific skeptics of climate change under the Racketeer Influenced and Corrupt Organizations Act, widely known as RICO.

‘Talk About a Chilling Effect’

The state attorneys general, calling themselves AGs United for Clean Power, held a press conference March 29 in New York with former Vice President Al Gore to announce formation of “an unprecedented coalition of top law enforcement” that would “defend climate change progress made under President Obama.”

All but one of the 17 participating attorneys general are Democrats; the attorney general of the Virgin Islands is an independent.

Some of the attorneys general, who are elected, have subpoenaed documents, communications, and research in an effort to acquire the work material of more than 100 academic institutions, nonprofit organizations, and individual scientists, the House committee notes.

Republican members of the committee who stand behind its subpoenas see the state attorneys general as colluding with green pressure groups to undermine free speech.

“Since when did it become a crime to express or hold an opinion?” Rep. Randy Weber, R-Texas, and chairman of the committee’s energy subcommittee, asked in a July 13 press statement, adding:

The difference of opinions is what makes our country so strong and unique. It’s this freedom without censorship or restraint that helped build our country.  However, this posse of attorneys general believe that those whose opinion, or scientific research, conflicts with the alleged consensus view on climate change should be the subject of investigation and prosecution by government officials—talk about a chilling effect on free speech.

The Daily Signal invited Schneiderman’s office in New York and Healey’s office in Massachusetts to respond to Smith’s latest public comment, but did receive a response from either office by deadline.

However, The Daily Signal reported previous statements from each office indicating they did not intend to comply. Eric Soufer, a press spokesman for Schneiderman, said in part:

Chairman Smith and his allies have zero credibility on this issue, and are either unwilling or unable to grasp that the singular purpose of these investigations is to determine whether Exxon committed serious violations of state securities fraud, business fraud, and consumer fraud laws. This committee has no authority to interfere with these state law enforcement investigations, and whether they issue a subpoena or not, this attorney general [Schneiderman] will not be intimidated or deterred from ensuring that every New Yorker receives the full protection of state laws.

Republican lawmakers, however, insist that AGs United for Clean Power are playing politics at the expense of free speech.

Instead of upholding the Constitution, protecting citizens, and putting real criminal behind bars, these attorneys general are using taxpayer dollars to manufacture charges to send a political message. This demonstrates a clear deviation from the legal duties of an attorney general and the possible abuse of discretionary judgement. It is not the job of the attorneys general to decide what science should be conducted, and their actions indicate their intent is to silence certain voices.

The extent to which Chairman Smith and Republican committee leadership, at the behest of Big Oil, [are] attacking the legal authority of state attorneys general to investigate whether major corporations misled investors and consumers is very troubling, and an affront to states’ rights.

Attorney General Healey hereby objects to the subpoena as an unconstitutional and unwarranted interference with a legitimate ongoing state investigation. The subpoena is a dangerous overreach by the committee and an affront to states’ rights.

Committee Republicans, Johnston argued, arranged for the subpoena while disregarding letters from Healey and the committee’s ranking Democrat, Rep. Eddie Bernice Johnson of Texas, detailing why the committee doesn’t have legal authority to “tamper with a state attorney general’s investigation into possible violations of state law by Exxon Mobil Corp.”

Republicans, he said, also disregarded the Massachusetts attorney general’s objection that most of the requested documents “are either attorney-client privileged documents or protected from disclosure as attorney work product.”

Johnston said Smith and other committee Republicans delivered the subpoena “without acknowledging” Healey’s offers to discuss her objections in a conference call with Smith or committee staff.

“This sequence of events suggests that the majority had no intention of considering the substance of Attorney General Healey’s objections,” he wrote.

The green groups on the receiving end of the subpoenas also indicated that they did not intend to cooperate with Smith and his committee.

The Climate Accountability Institute, for instance, posted a statement on its website that it responded July 13 “by declining to provide the requested documents on the basis of the committee’s lack of jurisdictional and legislative authority over our First Amendment rights to protect private communications and freedom of assembly with scientists and thinkers.”

CAI will not be intimidated, and we stand with other colleagues at UCS [Union of Concerned Scientists], Greenpeace, 350, and other groups and funders to denounce the unconstitutional and abusive tactics of Chairman Smith.