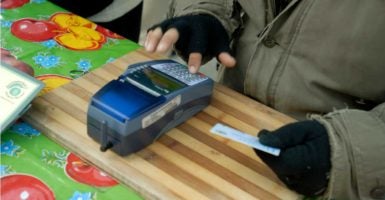 Between March and April of 2016, the number of food stamp recipients decreased nationally by 773,134. (Photo: Richard B. Levine/Newscom)

Nathan Mateer is a member of the Young Leaders Program at The Heritage Foundation.

Several states have grappled with welfare reform. A few states that have incorporated work requirements have seen encouraging outcomes that should provide a blueprint for greater welfare reform efforts nationwide.

From March to April of this year, the number of food stamp recipients decreased by 773,134. This brings food stamp enrollment down to 2011 levels and represents the biggest drop in participation since 2005.

Although food stamp participation grew rapidly during the recession, it was on an upward climb before then. Policies were put into place that made it easier for people to get on the program and stay there. Then, during the recession, the food stamp work requirement for able-bodied adults without dependents was suspended as part of President Barack Obama’s 2009 stimulus package. (The work requirement limits able-bodied adults without dependents to three months of food stamp benefits in a 36-month period unless they work at least part time, participate in a work program, or do community service.)

The decline in food stamp rolls between March and April of this year follows the re-establishment of work requirements in a number of states. On Jan. 1, 22 states had to reinstate the federal work requirement for areas of the state or the entire state because their waivers expired.

Some states did not wait until their waiver to end, however. Instead, they took a proactive approach to ensure that able-bodied adults were encouraged toward work.

Maine, one of the most proactive states in reinstating work requirements for food stamps, saw its caseload of able-bodied adults without dependents decrease by 80 percent within just a few months after re-establishing the work requirement.

Kansas has experienced similar results, seeing its caseload decline by 75 percent. Accompanying the decline in caseload has been an increase in employment and earnings for able-bodied adults without dependents.

The Foundation for Government Accountability identified that nearly 60 percent of Kansans who left the food stamp rolls following the establishment of food stamp work requirements found employment within 12 months and, “their incomes rose by an average of 127 percent per year.”

According to Indiana’s Family and Social Services Administration, “Nearly 5,000 Hoosiers who were receiving benefits in July are no longer receiving assistance because they obtained gainful employment and now have an income that exceeds eligibility standards.”

The vast majority of Americans support work requirements for welfare programs. Work requirements serve as a gatekeeper to ensure that benefits go toward those most in need, and they encourage people toward self-sufficiency. Work requirements provide a balanced approach to aiding those who need assistance while also being fair to taxpayers.

Unfortunately, the vast majority of government means-tested welfare programs don’t include a work requirement. Even the work requirements that do exist in a handful of programs, including the food stamp’s work requirement, need to be strengthened. Policymakers should look to the success of Maine and other states and move forward to promote work and self-sufficiency in the welfare system.