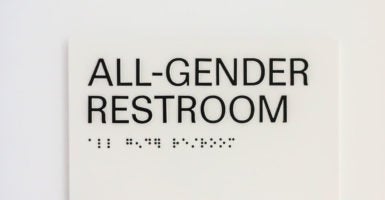 Kicking off what is expected to be a long legal battle, the U.S. Justice Department and the American Civil Liberties Union asked a federal judge to temporarily block parts of North Carolina’s bathroom law from being enforced.

If the judge agrees, provisions of House Bill 2, which mandates that people use bathrooms and locker rooms in schools, public universities, and other government buildings based on the gender listed on their birth certificates, would be put on hold until the court has a chance to hear their case, which is set to begin Nov. 14.

The ACLU joined forces with Lambda Legal and Jenner & Block to bring their case. Their case was consolidated with a similar challenge brought forth by the Justice Department. On Monday, the groups asked the court for a preliminary injunction to “seek immediate relief for transgender people,” arguing that it’s in the public’s interest.

Today we asked the court for immediate relief for our clients in #HB2 case. #WeAreNotThis pic.twitter.com/DBeKj68x25

Tami Fitzgerald, executive director of the North Carolina Values Coalition, which supports HB 2, said she believes parents would “revolt” if the judge were to grant the temporary exception.

“This is absurd and ridiculous,” Fitzgerald, who was present at Monday’s court hearing, said. “I think if the court were to find itself in the unfortunate end of the legally incorrect decision of agreeing with the DOJ, the parents of this country would revolt because HB 2 protects the privacy of everyone, but especially school children who are at an impressionable age.”

Gov. Pat McCrory, a Republican, signed HB 2 into law in March. The law requires people to use bathrooms and locker rooms in government buildings in accordance with the gender listed on their birth certificate.

Lawmakers enacted HB 2 after the city of Charlotte passed a nondiscrimination ordinance that allows transgender people to use bathrooms, locker rooms, and other sex-specific facilities in accordance with their gender identity.

The measure applies to all government buildings, including public schools and universities.

Under the law, if transgender people take the step of changing their birth certificate, they are allowed to use the bathroom that corresponds with their gender identity.

HB 2 has received strong pushback from the business community, culminating with the NBA pulling its All-Star Game out from the state.

U.S. District Judge Thomas Schroeder heard the case in the U.S. District Court for the Middle District of North Carolina.

Fitzgerald said Monday’s hearing went for nearly five hours, and that Schroeder “was really trying to hear both sides.”

In addition to the concerns of transgender people, at issue were safety and privacy concerns of students and parents.

“He asked a lot of questions about practical accommodations in showers and seemed rightly concerned about children in public schools,” Fitzgerald.

Joaquín Carcaño, 28, a University of North Carolina at Chapel Hill employee and transgender man who is the lead plaintiff in the lawsuit, called HB 2 “humiliating” in a press release issued Monday.

“All I want is to use the appropriate restroom, in peace, just like everyone else. It’s humiliating that this law separates me from my peers and treats me like a second-class citizen.”

“The judge seemed rather unhappy that the UNC system unilaterally decided not to enforce HB 2,” Fitzgerald said, adding the judge “never got a good answer.”

It is unclear when the judge plans to issue his ruling on the temporary injunction. Fitzgerald said he appeared eager to “figure it out,” “maybe in the next week or two.”