At Party’s Convention, Democrats Reflect on the Liberal Revolution That Split Them 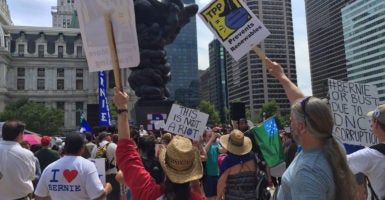 PHILADELPHIA—After the revolutionary himself confirmed that the revolution he started had run its course, a seething slice of the Democratic Party on Tuesday staged a protest on an elevated courtyard overlooking Philadelphia.

“Are you angry? Are you pissed off?” a bearded middle-aged man implores his fellow “Bernie or busters,” using a megaphone to project his voice in a way he couldn’t before Sen. Bernie Sanders gave legitimacy to an underground movement.

Slim, successful, and colored by rainbow-hued pins attached to her clothes, Virginia Shogren is not the person you’d expect to respond to this fiery message.

Virginia Shogren, 50, says that she and other liberals have been “pushed out” of the Democratic Party. (Photo: Josh Siegel/The Daily Signal)

But here she is, a modest figure among the “Racism is the Disease” and “4 A World of Peace” signs, present to declare the second act of the revolution.

Heart of the Conflict

As Democrats gathered for their national convention, attendees witnessed divisions in a party known to tout the ideal of standing together.

In interviews with more than 25 Democrats at the convention, The Daily Signal sought to understand the heart of the conflict, and what it means for the party’s future.

While the revolt amongst liberals bears resemblance to the populist-driven outrage that’s animated the Republican race, most self-proclaimed Democrats of various stripes here were reluctant to identify themselves as angry, and eager to transform Sanders’ failed presidential bid into a lasting movement for progressive change.

Glen Campbell is here to provide some coherence to his daughter’s idealism.

Twenty-one and “pissed off” at “racial, environmental, and economic injustice,” Brittany Campbell has just spent the last six months knocking on doors for Sanders, a politician in name only, she says, whose likeness decorates her tie-dyed T-shirt.

“Why do I support Bernie?” Brittany says. “I support Bernie because he supports all the values that I have ever wanted. Like literally everything he supports is aligned with my views exactly. Just how revved up and energetic he is. He’s the first politician ever to make me interested in politics.” Campbell, Brittany’s father, is proud his daughter has found her political identity early in life.

“As Brittany’s dad I think it is interesting to watch her,” Campbell says. “It’s her first real political voice, her first stance. She’s an idealist, you know.”

But Campbell, a 51-year-old Los Angeles artist and veteran progressive with perspective, realizes turning a movement into real change takes time. So simmer down and be satisfied with small gains, he advises Brittany.

“I’ve been through this so many times, and watched entire elections get hijacked by gerrymandering and all these other political moves and just outright theft,” Campbell says.

“So I’m here to try and tell her that this is so much better than it’s ever been. This is the first time people have a voice like Bernie. It’s so awesome and strong, and this is her [Brittany’s] first time, and she thinks this is the way it ought to be and always was. But it’s a process. I’ve been doing this a long time. You just go through the process.”

Like Brittany, Tyson Miller and Sebastian Feculak have not been at this long.

These two friends in their 20s are young and raw, and they know it. Miller and Feculak have just arrived from North Carolina on an overnight Amtrak train ride powered by cans of Mountain Dew, and now they are taking selfies with Uber drivers.

Ambitious, revved up, and—realistic—the comrades believe they have the perfect brew to take Sanders’ message of economic justice, and rebellion against money and power, and turn it into policy victories.

“We have already won by getting the platform how we got it—the most progressive in Democrats’ history thanks to Bernie,” says Miller, a 28-year-old Sanders delegate. “Now we have to continue the revolution going forward for years and years to come.”

Growing up as liberals in the age of President Barack Obama, Miller and Feculak would seem to have little reason to fret about the purity of their party. They like and admire Obama (most of the Sanders supporters that The Daily Signal interviewed don’t blame the president for their frustrations), although they are upset with the Trans-Pacific Partnership trade deal that his administration negotiated. While the friends may not be able to relate firsthand to the working-class struggles that motivated Sanders’ candidacy—Feculak, 23, is still in college—they’ve grown up in a nation fighting war and economic struggles, and they yearn for peace and prosperity.

“The last 13 years we have been at war, and for the last seven years we’ve had an economic crisis we are just now getting out of,” said Feculak, a Sanders delegate who moved to Charlotte from Poland in 2000.

“I feel like we’re the generation that’s been impacted the most by some of the biggest events in American history,” Feculak added. “We are trying to make things better. We feel disenfranchised.”

Miller, who grew up the son of farmers in a Christian conservative household, says his humble upbringing taught him to respect modest progress.

As the president of the Young Democrats of Chatham County, and a candidate for the town board of Pittsboro, North Carolina, Miller believes he’s in a position to take on Sanders’ objectives and advance them further.

“Bernie built this whole revolution, so we need young people stepping up and running for office in areas where there’s never been a progressive voice to show there are progressives,” Miller says. “We cannot let perfection be the enemy of progress.”

“I have felt angry for years,” says Buford, 56. “I’ve spent my entire life working for men and women and I’ve seen what laws, regulations, and trade deals have done to our country’s manufacturing base and middle class. You are barely surviving. You don’t have any security in your job. It’s just…It was a revolution that was bound to happen. And I don’t think it’s over with. I think we are in the middle of it.”

Even if they appreciate the economic frustration expressed by Sanders’ backers, these union workers believe the best way to solve problems is by coming together, not fracturing apart.

“He has a lot of faithful followers, and they are pretty much upset because he didn’t go the whole mile and they want him to be president of the United States of America, and that’s understandable,” says Birchfield, 34. “But if you are a true Democrat, regardless of who the candidate is, you should be willing to back that candidate. I guarantee at the end of this convention you will see one united Democratic Party. I guarantee that.”

Other Clinton supporters, and mainstream Democrats, credit the energy of Sanders’ movement for doing what they didn’t have the audacity to do—make the party platform more liberal—but question the tone that guides it, fearful that any negative energy will benefit Republicans.

“To hear about a political revolution, I think people got excited about that who have never been involved in politics before, and it’s kind of a shame we need that rhetoric for people to get excited,” says Phyllis Friend of Pennsylvania, a spiky gray-haired former educator in her 60s. “A lot of the young people—I have a son who is a millennial—have bought everything Bernie is selling. The older people like me are a little more realistic with what we want to do.” Chris Kolos, 47, wants Democrats to display hopeful optimism instead of fighting with each other. (Photo: Josh Siegel/The Daily Signal)

Chris Kolos, a 47-year-old Clinton delegate from Orlando, helped write the Democratic platform but owes its content to Sanders’ supporters.

“Certainly it’s the most progressive platform we’ve ever developed,” Kolos says. “And that’s all owing to Bernie Sanders and his supporters. His supporters are the most passionate, energetic, political force I have ever seen. I think it’s tremendous.”

Still, Kolos, the son of immigrant parents from Cyprus who survived in the U.S. cleaning bathrooms and waiting tables, is weary of the party showing anything less than hopeful optimism to counter Republican nominee Donald Trump.

“I hope for the best,” says Kolos. “I am not angry or frustrated at all. I am an attorney in Orlando, Florida, living the American dream and my story is no different than so many other people. Despite setbacks, I think this country is going to remain great.”

Outside the convention center in downtown Philadelphia, Harvey Dosik and Cliff Barney are trying to post up a table along a sidewalk to sell their homemade “FeelTheBern” T-shirts.

The friends drove here from California to sell these $20 shirts, which depict a shadow of Sanders’ face with his hair on fire, and now they are being told by police officers they can’t hawk merchandise in such a prominent place. But these diehards, who are both over 70 years old and see some of themselves in Sanders, profess not to be angry despite the fact they had to repack their shirts in boxes, and haul their business elsewhere in 90-plus degree heat.

“Anybody who is a ‘Bernie or buster,’ who are mostly my friends, they are looking for ideology and moral purity and I don’t think it exists in this world,” says Dosik, emphasizing that his shirts are American-made. “Am I disappointed Bernie didn’t win? Yes, I am. But am I angry? No, I am not. So what is going to happen is I am going to vote and work for Hillary after spending 17 months working for the Bernie campaign.”

Dosik sees his vote as reflecting his support for the issues Sanders fought for, so he doesn’t view himself as giving up the fight.

With that, Dosik and Barney walked away, ready to serve their party, and sell their T-shirts somewhere else.