Uber and Lyft Move the GOP Convention. Meet Some of the Drivers. 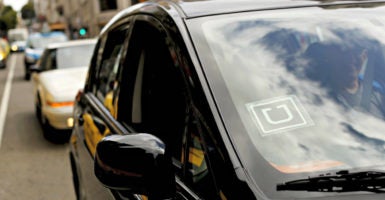 The Uber logo, or the Lyft one, distinguishes many a vehicle serving delegates and others attending the Republican National Convention. (Photo: Robert Galbraith /Reuters/Newscom)

CLEVELAND—Because of the Republican National Convention, Joseph Oluwamuyibe is living in his car. Every day, he wakes up around noon and drives to the nearest gas station, where he fills up his Toyota Highlander and freshens up in the restroom sink. Then, he works till 3 a.m.

But Oluwamuyibe, a 44-year-old Nigerian American, isn’t upset. He’s an Uber driver. And his setup is only temporary.

After the convention ends Friday, he will drive home to Columbus, Ohio, two hours away.

Part of a herd of ride-booking drivers lured to Cleveland by the possibility of big profits, Oluwamuyibe has ferried politicos, journalists, and protesters. But after more than a week, he says there hasn’t been much conflict in the city and none in his car.

“It hasn’t been bad at all,” he told The Daily Signal. “But I don’t talk politics in the car. I just want to stay out of it all.”

Most drivers describe convention week the same way. Business has been profitable, the passengers energetic, the convention uneventful.

Dozens of groups had announced plans to protest at the Republican convention, and a bitter primary election stoked fears of violence. But so far, drivers report, Cleveland has stayed pretty quiet. Convention officials say that’s due, in part, to ridesharing apps.

RNC spokesperson Audrey Scagnelli credits the apps for helping ease gridlock and keeping the convention moving smoothly. “We’re really happy Lyft and Uber are in town,” she says, “to help guests get from Point A to Point B during one of Cleveland’s busiest times.”

An emerging technology a couple years ago, ride-booking has become an official cornerstone of the 2016 Republican National Convention. The smartphone app allows passengers to call a private car with the push of a smartphone button.

Convention officials reached out to Uber and Lyft over a year ago to coordinate in advance.

The Republican National Committee chartered 350 buses, or about 3.5 miles of motor coaches, for convention week. But that fleet can move only a fraction of the more than 50,000 attendees who flocked into Cleveland. So Republicans have relied on ride-booking companies to pick up the slack, and business has been huge.

“This is the first time Uber has a presence at any national political convention,” Uber spokeswoman Lauren Altmin says. “So, it’s a new territory.”

In preparation, both Uber and Lyft recruited drivers from across the Midwest to come to Cleveland. Both companies worked closely with the city to alert its drivers on the best navigation practices to navigate the maze of security roadblocks downtown.

Competing for market share, neither company would tell The Daily Signal just how many trips they’ve taken. But both say business is booming.

“We’ve seen a major increase in driver activity on the platform this week,” Lyft spokesman Adrian Durbin says. “We have more drivers driving this week than ever before in Cleveland.”

That makes sense, because almost everyone uses the apps, says Rep. Mark Meadows, R-N.C., who has been using Uber to get around Cleveland.

“It took me a long time to figure out at first,” Meadows told The Daily Signal, “but when I came to D.C., I started using it because it’s faster, easier than hailing a taxi, and you don’t have to carry cash.”

Many drivers probably don’t recognize politicos such as Meadows when they hop into their back seat. And most seem to care less about politics and more about cash.

Lyft driver Valerie Banks, 71, says she’ll pick up anyone in her Chevy Impala regardless of political persuasion. And when passengers shut her door, the Cleveland native isn’t shy about sharing her opinions on the Republican nominee.

The Democrat adds that all of her Republican riders have been “really nice, very polite this week.” Her experience doesn’t seem unique.

R-Lorand Jackson, 65, has been driving Uber downtown in his Toyota Prius all week and he’s awarded most of his riders high marks on the app’s rating system—“mostly four and five stars at this point.”

Jackson identifies himself as an independent voter who is not a fan of Trump.

“But I wouldn’t mind picking him up so long as he’s a paying customer,” he says.

Jackson probably won’t get a chance. The convention officially wraps up Thursday night and Trump’s motorcade was scheduled to leave soon after.

That’s good news for Oluwamuyibe. After more than a week behind the wheel, he’s ready to park his car at home in Columbus, take a real shower, and sleep in his own bed. He says he’s tired but grateful for the business.

“All of the things I do are for my family, my wife and my kids, and to meet the requests of Uber.”

This report was modified after publication.