30% of Workers Need ‘the Government’s Permission to Work.’ 2 Senators Want to Change That. 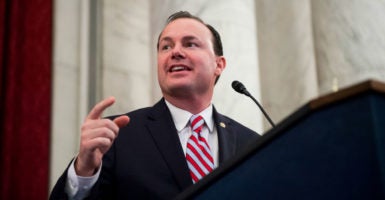 With nearly one in three American workers needing to acquire an occupational license in order to work, two Republican senators are stepping in with an attempt to alleviate the overreach.

Today, roughly 30 percent of workers are required to pay large sums of money and wait long periods of time “just to obtain the government’s permission to work,” Lee said at a Heritage Foundation event this month.

Occupational licensing is a state-level regulation requiring workers in certain fields to complete extensive training, pay fees, and obtain a permit before they can work.

“The ALLOW Act treats as valid any state occupational license and would enable any military member or a spouse of someone in the military to practice on any military base nationwide,” Paul Larkin Jr., a senior legal research fellow at The Heritage Foundation, said.

The law would affect the the District by eliminating “arbitrary restrictions on the freedom to pursue an occupation,” Larkin said. In doing so, “it would require the District of Columbia to justify imposing a licensing requirement by proving it is the least restrictive way to protect public health and safety.”

The ALLOW Act would also affect tour guides in the District by no longer requiring they obtain a license. This opens up opportunity for lower income workers, like students, to find work.

“The American labor force, one of our economy’s core building blocks, faces a lot of significant and, I believe, structural challenges today.” Lee said. “Many millions of Americans are out of work, and they are becoming out of work for a longer period of time—six months on average [more] than in recent economic recoveries.”

“The share of Americans participating in the labor market is now hovering near its lowest point in many decades—since 1977, in fact,” he added.

According to Lee, these licensing requirements essentially “block out and exclude” poorer workers from contributing to society and earning their keep. On the back end, these expensive requirements raise the price of goods and services, hurting the consumer.

Another group significantly impacted by occupational licensing is the U.S. military. Larkin told The Daily Signal:

Right now, occupational licensing requirements hurt service members. Service members are trained in certain fields such as being a medic or a corpsman. Not every state recognizes that military training as sufficient to grant a service member a license to practice in that field.

States would require medics, for example, to undertake thousands of additional hours of training before they can become civilian paramedics even though they are already perfectly qualified. Occupational licensing requirements also hurt military spouses.

“The military transfers service members every three years from one part of the U.S. to another. Military spouses may work in fields that are subject to occupational licensing,” Larkin said. “Unfortunately, their license does not transfer with them to another state. So the spouse of a service member, who is transferred from the Pentagon to California, may not be able to earn additional income for that military family by working in a particular field.”

John Malcolm, senior legal fellow at The Heritage Foundation, said at the Heritage event, “In all instances, it is usually the poor and underprivileged who want to pay lower prices for basic goods and services or who are seeking to climb the ladder of economic opportunity who end up suffering the consequences.”  Malcolm continued:

While licenses setting forth minimum qualifications make sense for some professions, such as medical doctors, many licensing schemes are unnecessary barriers to entry that stifle budding entrepreneurs, raise prices for consumers—for basic goods and services—and promote cartelization by protecting incumbent members of a trade from the rigors of free market competition.