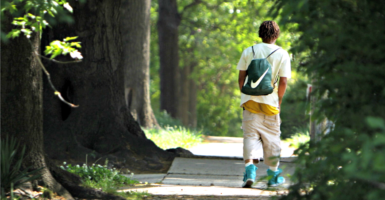 The style of this young man in Memphis is the target of one more local law that tries to uphold public decency. (Photo: Mike Brown/The Commercial Appeal/Zuma Press/Newscom)

Is it possible to raise community standards by the belt buckle? Timmonsville, South Carolina, is the latest locale to answer by making it a local crime to wear sagging pants.

The new law (Ordinance No. 543) bans “wear[ing] pants, trousers, or shorts such that the known undergarments are intentional[ly] displayed/exposed to the public.”

It also bans “public nudity,” displaying “pornographic material such that others are unwantingly exposed to the same or that minors are able to view the same.” And, yes, it bans displaying “the flesh of one’s rear-end, behind or backside … within the city limits.”

As Katrina Trinko, managing editor of the Daily Signal, asked of a similar law in Ocala, Florida: “Do we really need to make this illegal?”

The so-called Broken Windows Theory of policing developed in the mid-1970s on the idea that, as the late political scientist James Q. Wilson and criminologist George L. Kelling wrote, “the police ought to protect communities as well as individuals” from disorderly conduct.

“Young children do what they see. If they see older guys doing that, they’re going to grow up and think that it’s right,” Mayor Pro Tem William James Jr. told The State newspaper. “We need to put a stop to it. I understand there’s such a thing as fads, but this has gone on way too long.”

Promoting morality through “prohibition of public nudity and obscenity” was not alien to the American founders either, some of whom believed that various forms of public indecency “may well be considered as a species of common nuisance.”

Timmonsville is not the first town to consider saggy, baggy pants, or droopy drawers, as one such form of “indecency.”

Dublin, Georgia, outlawed sagging pants and issued $25 to $200 fines or community service for the conduct. Dadeville, Alabama, considered and ultimately rejected a similar prohibition that would have punished sartorial transgressors with $25 to $100 fines.

Riviera Beach, Florida, banned the style with the support of 70 percent of voters. Later, Judge Paul Moyle of Palm Beach County Court of the 15th Circuit struck down the law as “unconstitutional” when challenged by Julius Hart, then 17, who spent the night in jail for wearing sagging pants.

The boy’s father, who supported the ban, testified at his son’s trial: “I told him to pick out four belts. It’s not that he can’t afford a belt.”

And that similar law in Oscala? It passed unanimously and imposed penalties of “up to 60 days in prison and/or a $500 fine.” But two months later, it was repealed by a 4-1 vote.

NAACP leaders threatened to sue the Florida town on the grounds that the law would disparately affect African-Americans and argued the “issue should be dealt with at home, in church, or by community groups instead of by government agencies.”

Unlike the Ocala NAACP, though, the Terrebonne NAACP supported the parish’s ban. The civil rights organization’s leaders stated: “There is nothing positive about people wearing saggy pants. … This is not a black issue, this is not a white issue, this is a people issue.”

In Timmonsville, first-time violators will be verbally warned of the prohibition. A second offense will fetch a fine of $100 to $600, according to the discretion of a judge.

When it comes down to it—pants and otherwise—what will the effect of the Timmonsville ordinance be?

Timmonsville is located within South Carolina’s Florence County, which already bans any “willful and malicious indecent exposure of his/her person in any public place, on property of others or to the view of any person on any street or highway.” Anyone found guilty of this misdemeanor in Florence County is subject to a penalty of “not more than $500 or . . . not more than 30 days in jail or both.”

The Timmonsville ordinance differs only by explicit prohibition of exposing “known undergarments.”

States and political subdivisions may issue some regulations of individual dress in public related to legitimate interests in community health, safety, or morals. The fact that a public pornographic display or nudity is dangerous to the moral standards of a community is obvious and thus prohibited.

But to penalize wearers of sagging pants as if their dress presented a comparable hazard to community standards strikes many as ludicrous. One of these things may not be like the others.

Laws already on the books may suffice to guard public decency in the town of Timmonsville, which could take a lesson from the Ocala NAACP: The institutions that are best at promoting decency in personal dress are the home, church, and voluntary associations, not legislatures through force of criminal law.