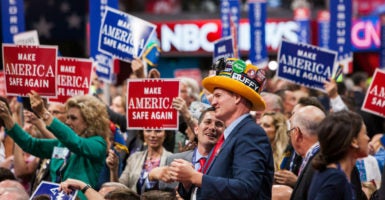 Delegates from all 50 states attend the Republican National Convention in downtown Cleveland, Ohio. The groups at the convention are whittled down to two: pro-Trump and anti-Trump, says a Montana delegate. (Photo: Natan Dvir /Polaris/Newscom)

CLEVELAND—It’s just after 3 p.m. on the afternoon of the first day of the Republican National Convention, and Art Wittich is leaning up against a red pole on the outskirts of the convention floor, observing the events taking place before him.

Directly to his right, CNN anchors and guests gather around an anchor desk, preparing for a segment. Directly to his left, delegates, members of the media, and Republican National Committee staff move on and off the convention floor.

In front of him, delegates from Texas—all dressed in matching cream-colored cowboy hats and red, white, and blue button-down shirts—danced to a jazz band playing “How Sweet It Is To Be Loved By You” for the 2,472 delegates gathered for the week.

Standing there, watching as thousands moved around him, Wittich had his hands clasped in front of him. In them, he held two booklets: one outlining the order of business for the 2016 Republican Convention, and another listing the rules of the convention.

The second booklet—the rules of the convention—would prove to be the subject of controversy that would unfold before Wittich’s eyes.

Wittich is a first-time delegate to the Republican National Convention. The convention, which kicked off Monday and will run through Thursday, is the first one Wittich has attended.

For some of the more than 2,400 delegates, serving their state at the convention means taking a week off from work and footing the bill themselves to make the trip to Cleveland. Though some state parties helped pay the way for their delegates, others—like one young delegate from Rhode Island—took to crowdfunding websites like GoFundMe to raise money.

Wittich and his wife arrived Wednesday and came strictly on a volunteer basis, meaning they took off from work and paid their own way. For Wittich, though, it was worth it to serve.

“It’s an honor and a privilege to be part of the nominating process,” Wittich told The Daily Signal. “But the RNC has to change and improve and reform so that we give voice but also meaning to grassroots involvement.”

Though the convention in Cleveland is a first for Wittich, he’s no stranger to the political process.

A former state senator and representative in the Montana Legislature, Wittich was defeated in the Republican primary earlier this year.

He lost after a jury decided he violated Montana campaign finance laws for taking illegal campaign contributions during his 2010 run for the state Senate.

But the investigation into Wittich, launched by Montana Commissioner of Political Practices Jonathan Motl, hasn’t been without controversy. It’s been called a “speech mugging” by The Wall Street Journal.

Wittich served as the majority leader in the state Senate and led the charge against Medicaid expansion in the state House. After losing his primary last month, he turned his attention to the Republican National Committee.

“I like to be where the action is,” he said. “When I was in the state Senate, that was leadership. In the state House, that was trying to kill Medicaid [expansion] when I become House Human Services [Committee] chair. The RNC is the only organization big enough to stop socialism.”

“It’s as simple as that. There is no other organization that can effectively combat it,” he continued.

Wittich will not only serve as a delegate to the convention, but the 23 members of Montana’s delegation further selected him and a female delegate to serve on the rules committee.

He was also elected to serve as a RNC committeeman, a four-year term that starts the day after the convention ends. Sen. Mike Lee, R-Utah, tries to gain the attention of the podium at the convention on July 18, 2016. (Photo: Pete Marovich/UPI/Newscom)

Wittich arrived in Cleveland last week, when the rules committee met to vote on the rules for the convention.

The panel gathered for 16 hours on Thursday, Wittich said, and saw intense debate over an attempt to unbind delegates from voting for the candidate who won their state and instead allow them to vote their conscience.

Republican Sen. Mike Lee of Utah, who is at the convention as a delegate also on the rules committee, was one of the loudest voices behind the effort.

Wittich doesn’t consider himself to be a disrupter, but he said he was moved and impressed by three speeches Lee gave last week during the committee meeting.

The committee met again on the fourth floor of the Quicken Loans Arena on Monday and cast one vote—to pass the rules debated the prior week.

Though rules committee Chairwoman Enid Mickelsen, a delegate from Utah, said there had been ample time for debate and discussion on those rules, Wittich disagreed.

“People weren’t even allowed to speak,” he said. “[The RNC] eliminated dissent and rejected reforms by the states to make the RNC more grassroots.”

“When you know that there are people who are frustrated with the process, you can take one of two approaches. One is you can hear them out and have the debate, and the other approach is just to try to push it through with procedural motions in a long day,” he said, continuing:

The RNC has to reform and has to evolve. I think it’s going to get there, I really do. I’ve talked to a number of new RNC members who want that to happen. I’m optimistic that the institution will start evolving.

Wittich, his wife, a guest to the convention, and his fellow Montanans stayed in a hotel outside of Cleveland, in Westlake, Ohio.

At 11 a.m. on Monday morning, the Montana delegation boarded buses bound for the Quicken Loans Arena for the start of the 2016 convention.

When looking out at the floor from the convention stage, the Montana delegates were seated in the back, left corner, next to delegations from Texas and Colorado. Montana delegates and guests who traveled to Cleveland donned denim vests with their state name sprawled across their backs in red and white lettering. Stickers proclaiming “Unlock Our Lands”—a call for the federal government to give land back to the people living out West—were plentiful, and Montana’s delegates were quick to hand them out.

Wittich, though, bucked his state’s attire, at least for the convention’s opening day.

On Monday, he said his lineup of meetings and events called for a tan sport coat and navy slacks. His “Montana,” he called it, will come out as the week goes on, when he trades in his business attire for denim and cowboy boots.

When Wittich arrived at the arena around 12:30 p.m., he quickly made his way to his seat on the convention floor.

The convention kicked off at 1 p.m. that afternoon with a short speech from Chairman Reince Priebus calling the convention to order. Then, the delegates broke out to meet with their respective committees.

Wittich joined a throng of fellow delegates on the rules committee and members of the media who gathered to pass the rules for the convention.

The Montana delegate said that the committee had previously been divided into four factions: pro-Trump, anti-Trump, pro-RNC, and RNC reformers. Eventually, though, the groups were whittled down to two: pro-Trump and anti-Trump.

Wittich, himself, advocated for reforms that would lessen the power of the committee’s chairman and give more power to the grassroots. He also introduced a measure to explicitly bind the delegates, which Wittich said was an effort to codify what so many committee members were pushing in the first place.

Ultimately, the rules committee passed a package similar to those passed during the 2012 convention, with minimal changes.

It was when Wittich and the delegates arrived back on the convention floor, though, that the chaos started.

Giving a Voice to the Grassroots

It was just after 3 p.m. when Wittich returned to his seat on the convention floor.

First, the delegates voted to pass a report from the credentials committee, one of three that met Monday.

It was when Rep. Steve Womack, R-Ark., chair of vote procedures, arrived on stage to call for a vote on the rules package passed by the 112-member committee that there was uproar among a group of delegates opposed to New York businessman Donald Trump.

Anti-Trump delegates called for a roll call vote from all 2,472 delegates on the rules package after gathering the signatures needed to do so.

But after chants of “Roll call vote” and “U-S-A” broke out in the arena, efforts to force the roll call vote failed. Delegates cheer during the second session of the convention on July 19, 2016. (Jonathan Ernst/Reuters/Newscom)

The discord centering on the convention rules caught many onlookers by surprise, as delegates typically pass the package with little fanfare.

Wittich, though, said it highlights the disunity not only among convention goers, but also in the country.

“The party is split and the country is split, so it makes sense for the convention to reflect that a little bit,” he said. “I didn’t expect this particular thing, but it just shows the level of frustration inside the party.”

For his part, Wittich didn’t partake in the debate on the convention floor, but he did admit the RNC has some soul-searching to do.

“[The RNC is] not listening to the people,” he said. “It’s a top-down organization. It’s really about speech. It’s association. It’s having authority and varying viewpoints and not being afraid to discuss and debate and change.”

‘An Honor and a Privilege’

After the delegates passed the rules package by voice vote, they proceeded to pass the party’s platform with no controversy.

The convention then stood in recess until 8 p.m. Monday night, when delegates and attendees gathered to hear from a lineup of speakers including actor Scott Baio; Sen. Tom Cotton, R-Ark.; and Melania Trump, with speeches centered around the theme “Make America Safe Again.”

During the hours-long break, Wittich and his wife headed to a reception hosted by the Republican National Lawyers Association and returned to the arena later on for the evening’s events.

Though Wittich admitted his first convention as a delegate wasn’t what he expected, he said he doesn’t regret serving as a delegate and attempting to challenge the status quo within the party committee.