How the Federal Government Can Get Its Spending Under Control 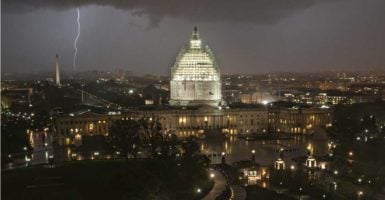 The "Penny Plan" could reel in the government's spending to sustainable levels. (Photo: Aoc/Zuma Press/Newscom)

The federal government has a spending problem that threatens to swallow up the resources of the American taxpayer and crush the American economy. Congress can begin to solve this dilemma if it expands self-imposed restrictions to the part of the budget that is driving the country toward crisis.

With Congress reneging on its promise to restore regular order and likely heading toward a massive continuing resolution or omnibus appropriations bill that will bust the Budget Control Act’s discretionary spending caps once again, it is time for a different approach.

Under this plan, for fiscal year 2017, the cap would be $3.6 trillion for total noninterest outlays minus 1 percent. For each subsequent year through 2021, outlays would be capped at the previous year’s level (not including net interest payments) minus 1 percent. Starting in the fiscal year 2022, and all subsequent years, total spending would be capped at 18 percent of gross domestic product, in line with the historical revenue average.

If adopted and Congress failed to comply with the spending cap, spending reductions necessary to arrive at the capped level would be enforced by sequestration. Unlike the current form of sequestration applied to the Budget Control Act spending caps, the Penny Plan would not exempt any of the programs listed under the Balanced Budget and Emergency Deficit Control Act of 1985, except payments for net interest.

It is important that Congress reconsider current sequestration exemptions that protect a broad swath of programs from cuts. This new version of the Penny Plan begins this critical discussion.

Automatic spending cuts are a blunt tool to rein in growing spending, and the main drivers of the debt—Medicare, Medicaid (including Obamacare), and Social Security—are best reformed with targeted structural reforms that secure benefits for those most vulnerable in society, while protecting working Americans from undue debt and tax burdens.

Enforcement by sequestration promises to spur negotiations to avoid automatic spending reductions in favor of a more deliberate approach. By not exempting any programs, Congress is more likely to adopt real reforms to entitlement and welfare programs so that it can choose how those programs are impacted rather than let the sequester indiscriminately do so. In the absence of legislative agreement, sequestration ensures that spending reductions take place regardless of the adoption of targeted reforms.

In February, The Heritage Foundation released its “Blueprint for Balance: A Federal Budget for 2017,” the first of a three-part Mandate for Leadership series that will be published over the course of 2016. This blueprint provides detailed recommendations for Congress’s budget, including the adoption of a statutory spending cap. This is one key component of budget process reform.

To stop out-of-control spending and growing debt in its tracks, Congress should immediately adopt a statutory spending cap across all outlays and enforced by sequestration.

When functioning as intended, the budget process should encourage healthy debate on fiscal issues and begin negotiations over the tradeoffs and considerations for congressional spending and taxation. Given today’s broken process, the threat of across-the-board cuts is an effective tool to bring lawmakers to the table to debate fiscal issues driving the nation into crisis.

Once the budget balances, spending should be capped at a level that maintains that balance, only allowing for certain limited annual adjustments. During periods of normal economic activity and absent exigent national security demands, the spending cap should grow no faster than the U.S. population and inflation. The cap should bind more stringently when debt or deficits exceed specific targets.

The Penny Plan takes a step toward consideration of a statutory spending cap to limit the growth in government and improve the nation’s fiscal course. Congress must put the country’s budget on a sustainable path to secure prosperity for current and future generations, and a spending cap is one important tool to get there.