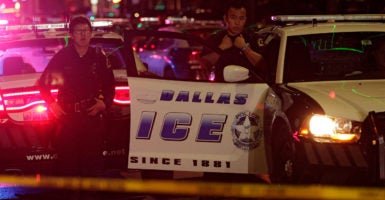 Like most observers, I watched as events unfolded last night in Dallas with a sense of disbelief and horror. When some semblance of calm was restored and the carnage could be assessed, we learned that five Dallas-area police officers had lost their lives in a senseless act of violence.

Sadly, although nearly beyond comprehension, it cannot be claimed that the violence perpetrated against law enforcement on Thursday night was unexpected. Our nation as a whole has allowed inflammatory anti-police rhetoric, often unchecked and devoid of context, to stoke the flames of anger, resentment, and discontent.

At Americans in Support of Law Enforcement, where I serve as the organization’s president, we released a statement earlier today, which read in part:

Thursday night’s violence against Dallas-area law enforcement officers was an unconscionable act of aggression against both civil society and the rule of law. Make no mistake, this was not an act of protest. This was an unprecedented and unprovoked act of terror against the men and women of law enforcement. Brent Thompson, of Dallas Area Rapid Transit, was one of five officers killed in the shootings. (Photo: Handout/Reuters/Newscom)

We learned on Friday morning that one of the suspects “stated he wanted to kill white people, especially white officers,” according to Dallas Police Chief David Brown. He also allegedly told a hostage negotiator that his anger was fueled by the Black Lives Matter movement and the recent shootings of African-American individuals at the hands of police.

What occurred Thursday evening was indeed an act of terror perpetrated against the entire law enforcement community.

But the president offered these words only after having spent the past seven years routinely criticizing the entire law enforcement community and criminal justice system in the wake of various isolated controversies.

It is time for reason and perspective to replace demagoguery and vilification in the broader conversation on policing in America.

Despite what some may claim, the tragedy that befell Dallas was neither a protest nor a statement. It was murder.

This post has been updated to include a fuller quote from Dallas Police Chief David Brown about the motives of one of the suspects.