Supreme Court Stands by and Watches as Religious Freedom Is Curtailed 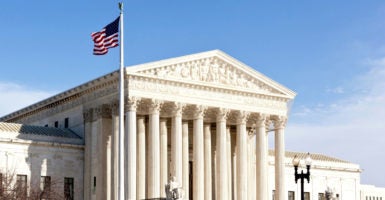 The problem is that the state of Washington put in place regulations permitting pharmacies to make referrals for a host of secular reasons but barring pharmacies from referring customers elsewhere for religious or moral reasons. (Photo: iStock Photo)

Last week, in a development which is a loss for freedom, pluralism, and tolerance in America, the Supreme Court declined to take up the case of Stormans v. Wiesman.

This should not be a difficult case. It involves pharmacy owners (members of the Stormans family) who do not want to dispense certain drugs that can kill human life in its earliest stages due to their moral and religious beliefs, yet are willing to refer potential customers to nearby pharmacies.

Because the drugs are carried by more than 30 other pharmacies within five miles of the Stormans’ pharmacy, it seems that there is a clear way in this case for conscience to be honored and the customers to receive their drugs. So what is the problem with Stormans’ customer referrals?

The problem is that the state of Washington put in place regulations permitting pharmacies to make referrals for a host of secular reasons but barring pharmacies from referring customers elsewhere for religious or moral reasons.

These regulations were challenged as a violation of the Free Exercise Clause due to their targeting of religious beliefs. The Supreme Court had an opportunity to hear the case, yet declined. Justice Alito (joined by Chief Justice Roberts and Justice Thomas) dissented from the court’s denial of review.

In the contraception/abortion debate, much of the discussion often centers on “access” to drugs and services. If there was a genuine issue of access and the need to balance it with the Stormans’ rights, one could understand how there could be different sides to the argument. But here there is not even an issue of access.

Customers could obtain what they want from 30 other pharmacies within five miles of the Stormans’ pharmacy!

So what purpose did the state’s regulations serve?

Washington even admitted that “facilitated referrals do not pose a threat to timely access to lawfully prescribed medications,” and, as Alito observed in his dissent from denial of certiorari, “none of [the Stormans’] customers has ever been denied timely access to emergency contraceptives.”

At the end of the day, the only reason for this law is to disparage the moral objections of those who think differently and force these unwilling pharmacists to play a part in the government’s imposed regime by steamrolling their individual freedom. And now, in permitting a lower court decision against the Stormans to stand, Justices Kennedy, Breyer, Sotomayor, Kagan, and Ginsburg apparently see no problem with letting the state of Washington squash religious freedom by barring referrals tied to religious reasons but permitting them for non-religious reasons.

In refusing to hear this case, the Supreme Court missed an opportunity to bolster constitutional liberty in the face of baseless and illegitimate government targeting of religion. Yet the Court felt it important to address such targeting of religion just last year in Holt v. Hobbs.

When a Muslim prisoner was not allowed to a grow a beard for religious reasons, the Supreme Court unanimously found that under a RFRA-type standard the government could not permit non-religious exemptions (such as medical reasons) for beards while denying religious ones. In that case, such an inconsistency on the part of the government showed its policy was not properly tailored to achieve the legitimate government goal of safety and security.

Similarly, as Justice Alito points out in his dissent from denial of certiorari in Stormans, the Supreme Court’s own Free Exercise precedent in Church of Lukumi Babalu Aye, Inc. v. Hialeah holds that regulations which are gerrymandered to target religious exercise are unconstitutional. Yet Justice Kennedy, who authored that opinion, did not side with Justice Alito here. Why the inconsistency?

While the Supreme Court has many reasons for what it does, it doesn’t escape notice that Church of Lukumi Babablu Aye and Holt (both unanimous decisions) both contain claims by members of minority religions. Notably, the so-called “conservative” members of the Supreme Court happily upheld religious rights in those instances.

Their consistency leads them to also do so here when a Christian is discriminated against, while the so-called “liberals” would decline to do so in Stormans (and in other cases involving Christians, such as Burwell v. Hobby Lobby). While it is impossible to know for certain the reason for this trend, the pattern is certainly troubling. And if such a pattern of so-called “conservative” rulings caught the eye of liberal activists, you could be sure they’d point it out.

Such developments, along with others in recent free exercise and RFRA jurisprudence, increasingly show a Supreme Court which now picks and chooses what rights to uphold based on ideology, politics, and the religion at issue, instead of being a neutral arbiter of law.

As Justice Thomas exclaimed in his dissent from the Supreme Court’s opinion in Whole Woman’s Health v. Hellerstedt (a case which struck down state abortion health and safety requirements, and which confirms the Supreme Court’s increased arbitrariness), “[t]he Court should abandon the pretense that anything other than policy preferences underlies its balancing of constitutional rights and inter­ests in any given case.”

The price to be paid for preferring policy over the rule of law is, as Justice Alito put it in his Stormans dissent, the continued existence of “regulations [which] are improperly designed to stamp out religious objectors.” This price may be acceptable to some for now—at least until it is turned around and applied against them.