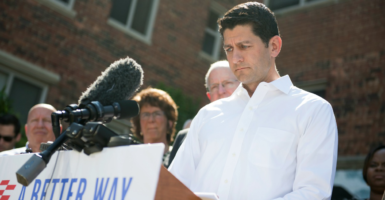 The proposal pays serious policy attention to one of our most pressing issues. (Photo: Tom Williams/CQ Roll Call/Newscom)

The 37-page document offers a vision for health care that is in sharp contrast to Obamacare. Unlike Obamacare, which hinges on turning more control over to the government, this vision recognizes and embraces the important role of the consumer in demanding from the market higher quality care at lower cost.

It also recognizes that simply repealing Obamacare is not enough.

The proposal pays serious policy attention to one of our most pressing issues. It identifies the core challenges facing the health care system, starting with the damage done by Obamacare, and offers a broad list of policy recommendations that begin to move the health care reform in a different direction: one that is more patient-centered, market-based.

1. Repeal of Obamacare. The proposal documents the many failures of Obamacare and makes a strong case why it must be repealed. As the report correctly points out, “this law cannot be fixed. Its knot of regulations, taxes, and mandates cannot be untangled. We need a clean slate in order to pursue the patient-centered reforms the American people deserve.”

Moving forward, it is critical that repeal remains the top priority for the next Congress. The reconciliation process was a good test run at repeal but more will need to be done to ensure that the law and its metastasizing rules and regulations are fully removed.

2. Equalizing the tax treatment. The proposal recognizes that the long-standing tax treatment of health insurance disproportionately benefits those with employer-sponsored coverage and consequently is outdated and unfair.

The proposal would offer tax relief to those who do not have access to either employment-based coverage or public programs such as Medicare.

It would also cap the amount that workers could receive in pre-tax income for employer-sponsored health benefits. That would not only remove some of the perverse incentives driving up the cost of coverage but would also align health benefits with other employee benefits—such as retirement plans, dependent care accounts, and life insurance—all of which have statutory limits on the amount that is treated as pre-tax income to the worker.

Moving forward, it is important that the tax code remains neutral to the choices of the consumer. Meaning, individuals, not the government, should be able to choose the type of tax relief they receive.

Expanding access to the credit will spur greater innovation and allow the consumer to select the plan that best meets their needs.

Moving forward, the reforms to Medicaid should focus on improving the care available to enrollees. Specifically, the reforms should move able-bodied adults and children into the private market by shifting current spending into fixed subsidy amounts that recipients can apply to any individual market or employer-sponsored coverage available to them.

That would reduce demands on the program, thus enabling states to better focus on the more complex challenges involved in providing care for Medicaid’s smaller, but much more costly, population of disabled enrollees.

4. Modernizing the Medicare program. The proposal recognizes the necessary changes needed to sustain Medicare moving forward. The proposal sets in place a process to transition the entire Medicare program toward a defined contribution (“premium support”) model where seniors are able to choose among a variety of competing health plans, including traditional Medicare, on a level playing field.

Moving forward, Congress should quickly take advantage of the powerful, bipartisan consensus that already exists for simplifying traditional Medicare: combine Medicare Parts A and B, replace the complex cost sharing with a single deductible and uniform coinsurance, and replace open-ended Medigap coverage with strong catastrophic protection.

Transforming traditional Medicare into a simpler, more comprehensive, and more integrated plan would not only benefit enrollees right away, but would also lay the groundwork for eventually shifting the entire program to the more sensible premium support financing approach.

5. Extending commonsense insurance reforms and spurring innovation. The proposal recognizes the need for a stable and functional market for health insurance and the need for greater innovation. The proposal fixes the many gaps in the marketplace. For instances, it extends pre-existing condition protections that were in place prior to Obamacare and extends additional protections for those who maintain continuous coverage.

Moving forward, there is a need for a broader and more robust agenda focused on removing regulatory burdens across the health care sector to spur greater competition and innovation.

Getting the foundation right is the first and most critical step. There are, of course, areas where the recommendations could be more robust and other areas where further refinements are needed. But, on whole the proposal is a good start.