What Liberals Get Wrong About the Family 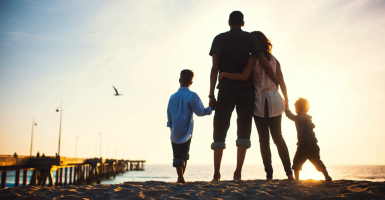 Conservatives are wrong to accuse the liberals of relativism. They are not relativists, but have fanatical attachment to certain ideals, which conservatives often fail to understand.

One such ideal is autonomy, which guides their entire sexual agenda. As I argue in “The Obligations of Family Life: A Response to Modern Liberalism,” the Left’s understanding of autonomy does much damage to marriage and family life.

At first glance, autonomy seems to reflect the traditional American notion that all human beings are created free and equal. For example, everyone believes that marriage begins in the consent of two people and that a married couple should be able to make the most important decisions about their common life without state interference.

But autonomy, as today’s liberals understand it, is about a radical form of personal independence: Everything about a truly autonomous individual’s identity must come from their free choice.

For example, this means one should not be limited by sex or one’s body—both being givens that one did not choose. In fact, nothing besides an individual’s choice should bind him. Should the reasons for a choice become defunct, those choices should not long bind the individual.

This understanding of autonomy is in deep conflict with the core experiences of procreation, love and the family. Marriage and family life require unchosen, enduring obligations that autonomy advocates cannot understand.

In fact, American society has already paid a steep price for the attempts to redefine the core experiences of the family to autonomous choices. The disintegration of the American family can partly be blamed on the effects of autonomy, which has unsettled the connection between parents and children, and disrupted our understanding of marriage.

Parental duties flow from the natural, biological relationship between a husband/father and a wife/mother. But since parents cannot choose their children and children cannot choose their parents, their connection cannot be explained on the grounds of autonomy. That is, the fact of birth itself makes the standard of autonomy impossible.

Marriage creates an enduring bond between a man and woman. That bond prepares married couples to care for their children. In this, spouses are transformed through their union into people who are able and willing to serve something beyond their individual selves—a child.

Dependent children thrive in an atmosphere created by marital trust and stability—which means that marriages should endure. Marriage, as such, is about interdependence, not autonomy. Autonomous people can simply leave a marriage—without the need to believe the attachment is permanent. Convincing parents that they are autonomous individuals gives them an excuse to neglect parental duties, much to the detriment of children and society generally.

Much evidence shows that children raised without two married, biological parents fare worse on a whole host of social indicators.

Grounded in these dependencies, marriage and family life end up being among the most meaningful of life’s experiences. Autonomy cannot explain them. By refusing to see their significance, autonomy harms them.