One Year After Same-Sex Marriage Decision, Dissent Not Permitted 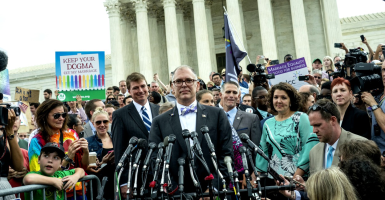 By now, nearly one year after the U.S. Supreme Court’s decision in Obergefell v. Hodges, it should be clear that the aggressive and unreasonable elements of the LGBT movement cannot harmonize themselves with freedom for Christians and other conscientious objectors.

With few, commendable examples, the LGBT movement’s activist class, who advocated for same-sex marriage and who are now aggressively pushing for government at all levels to implement their morality through special rights protections, bans on counseling for same-sex attraction, and now gender identity protections, simply want no dissent.

Beneath their policy demands is a desire for approval and forced participation in a regime endorsed one year ago by the Supreme Court itself. But approval is not obtained when others still have a legal right to conscientiously object.

If you want more evidence, look no further than recent efforts to attack Mississippi’s law protecting the rights of people to opt out of being involved in same-sex marriages.

Instead of recognizing Mississippi’s law (HB 1523) for what it is—a series of reasonable accommodations with explicit requirements that the government not interfere with same-sex couples’ rights—some of the usual suspects have chosen to sue because the accommodation isn’t good enough for them.

For example, Section 3(8)(a) of the law states that the person:

shall take all necessary steps to ensure that the authorization and licensing of any legally valid marriage is not impeded or delayed as a result of any recusal.

And Section 8(2) provides that:

[n]othing in this act shall be construed to prevent the state government from providing, either directly or through an individual or entity not seeking protection under this act, any benefit or service authorized under state law

The ACLU claims that the law makes same-sex couples feel different, and the Campaign for Southern Equality claims that they may be treated differently under the law; never mind the provisions cited above mandating otherwise.

Most tellingly, this group requests “any person recusing himself or herself under Section 3(8) of HB 1523 must treat all couples equally and shall therefore desist from issuing any marriage licenses to any other couples, including opposite-sex couples” (emphasis mine).

Never mind that no one has impeded any access to any licenses. So why demand that the clerk be ordered to desist from issuing all licenses if a same-sex couple would not notice any difference? Because, as seen in attacks on judges who wish to opt out elsewhere, this is about suppressing religious expression. The activist class can’t stand the idea that someone would not agree with their same-sex marriage, so they seek to stop the expression of these dissenting views—all in the name of “equality.”

The last group of plaintiffs to challenge HB 1523 claims that the law is invalid because it only allows people to opt out of the regime who hold certain beliefs. Never mind that that’s the point of opting out; no one is violating the consciences of those who support same-sex marriage. Such religious accommodations have been permitted in our laws in numerous ways for many years. Yet when it comes to the progressive LGBT agenda, there shall be no dissent.

The legalization of same-sex marriage has not slowed the push for these coercive policies. After Obergefell, same-sex marriage licenses are being obtained without delay—but that’s not satisfactory to the activist class of the LGBT movement, who still has the same desire to stomp out any disagreement.

Ask yourself: who is being reasonable here?

On the one year anniversary of Obergefell, we have our answer. The question is what the future will hold. Will we as a society incline toward accommodation of religious views, or intolerance and suppression of deeply-held beliefs?

We must get this right, for our survival as a free and pluralistic nation depends on it.