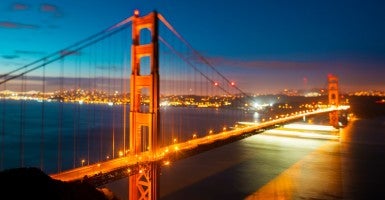 A potential San Francisco ballot proposal could give illegal immigrants a voice in Bay Area schools.

A charter amendment by San Francisco Supervisor Eric Mar is intended to grant illegal immigrants with children in school the right to vote in San Francisco Unified School District school board elections. Two similar measures were presented in the past, but they were rejected by voters.

“The time is right for San Francisco to make history, to pave the way for immigrant parents to have a say in the policy decisions that impact their child’s education and who gets to sit on the Board of Education,” Mar said in a statement.

The Public Policy Institute of California found “almost a quarter of the nation’s undocumented immigrants reside in California, where they make up slightly more than 6 percent of the state’s population.”  The Institute says San Francisco has a “substantial” amount of illegal immigrants.

The institute estimates “that 13 percent of California’s K–12 school children have an undocumented immigrant parent,” meaning the passing of Mar’s proposal would create a significant increase in the San Francisco voter roll.

Hans von Spakovsky, a senior legal fellow at The Heritage Foundation, told The Daily Signal in an email, “It is obvious that the citizens of San Francisco don’t want this—they’ve rejected it twice before in referenda. Apparently, however, Supervisor Eric Mar is so interested in the votes of noncitizens that he is willing to override their concerns and disenfranchise citizens by diluting their votes.”

According to California Law Review, former supervisor Matt Gonzalez used the idea to allow noncitizens to vote in San Francisco school board elections as an education platform for his 2003 mayoral campaign. After losing the election, he proposed the idea as a charter amendment in 2004 where it was voted down 51 percent to 49 percent.

A similar charter amendment proposed by Assemblyman David Chiu in 2010 failed to pass into San Francisco law with 54 percent of voters in opposition.

“If San Francisco does this, it will join a tiny handful of cities and towns that allow noncitizens to vote in local elections,” von Spakovsky added, calling it “bad public policy.”

“It is obvious that the citizens of San Francisco don’t want this.” – Hans von Spakovsky

Mar noted the reason behind the proposal is because he believes parental involvement helps students perform better. “This ballot measure would be a first step to expanding democracy and voting rights to immigrant parents,” Mar said in a statement.

Mar is also damaging the democratic process. It is wrong to extend the vote to individuals who have not entered the American social compact or made a commitment to our Constitution, our law, and our cultural and political heritage by becoming citizens.

It is even worse to extend the franchise to illegal aliens whose very first act is to violate our laws; that encourages contempt for the law. They should not be participating in elections and potentially changing the outcome of closely contested races that affect how the actual citizens of San Francisco will be governed.

“In the coming months, Supervisor Mar will work closely with parent leaders, community partners, and immigrant-rights organizations to develop a grassroots efforts,” a press release provided to The Daily Signal from the supervisor’s office said. “The passage of this charter amendment would allow the voices of immigrant parents to be included in shaping the future of San Francisco’s education policies.”

San Bernardino and Pomona, both cities in California, have considered implementing charter amendments similar to Mar’s but have not taken official action.

Mar hopes to have this charter amendment on the November 2016 ballot. It is currently co-sponsored by three San Francisco Board of Supervisors members: David Campos, District 9; Malia Cohen, District 10; and Scott Wiener, District 8.