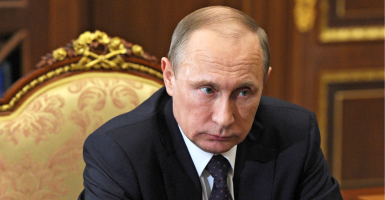 The Kremlin has started cracking down with increasing severity on users of social media who dare to criticize the state of affairs in Russia or who parody Russian leader Vladimir Putin.

For the crime of posting a picture of a tube of toothpaste with the caption “Squeeze Russia out of yourself,” Andrei Bubeyev was sentenced to three years in prison.

The law under which this draconian verdict was handed down was passed in 2002. Vaguely worded, it has been targeted at extremism, hate speech and anti-government speech alike. Extremism is defined as activities that aim to undermine the nation’s security or constitutional order, or glorify terrorism or racism. The law allows the judge to interpret who poses a danger to the state, and last year as many as 54 social media users were caught in its net.

Bubeyev seems an unlikely candidate for such draconian punishment. He is a construction worker with a passion for politics, but only 12 followers on his VKontakte page—Russia’s most popular social media network that has a total of 270 million accounts.

The Russian authorities may have decided to make an example of him to deter online dissenters.

Dear @twitter, why in the world have you suspended one of the funniest parody acc’ts around @DarthPutinKGB? It’s a joke account, not a troll

Essentially, the Russian government has declared war on the very concept of objective news reporting itself. In the warped word of Russian propaganda, reality is whatever the Russian leadership decides it is.

Ironically, at a recent media forum titled, “The New Era of Journalism: A Farewell to the Mainstream,” Russian propaganda chief Dmitry Kieselev argued that in the world of social media, there really is no need for traditional news anymore. With the Russian government’s war on social media, Russians are in effect denied both.

Russians are living behind a wall of unreality, in a state of “information isolation,” as described by the Levada Center, an independent Russian polling organization. Only 1 percent of Russians receive news from foreign sources on a daily basis. Tragically, 87 percent never do.

That isolation helps keep Putin in power, and it makes Russians paranoid about the West, especially the United States.