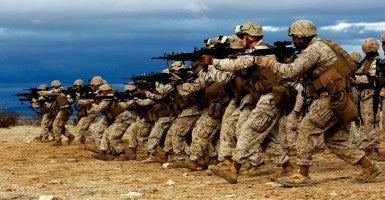 House Speaker Paul Ryan, R-Wis., has laid out an agenda that is in keeping with what most Americans want: a safe, strong, and prosperous country. (Photo: Lance Cpl. Kathryn Howard/Released)

The United States is under growing threats, and House Speaker Paul Ryan, R-Wis., and his team deserve credit for recognizing that threat and outlining a plan for making America safer, stronger, and more prosperous.

During the last seven years under President Barack Obama, the United States has grown less safe. Threats are rising, such as state-sponsored cyberattacks affecting millions of Americans, terrorist attacks at home and abroad, Russian and Chinese aggression, and dictators with nuclear missiles.

At the same time, Obama has offered weak and misguided leadership and overseen a dramatic weakening in America’s ability to defend itself. Ryan, Majority Leader Kevin McCarthy, R-Calif., and the chairmen of the House national security committees offer in their agenda a clear-eyed view of the world as it really is, and a striking criticism of Obama’s failures.

Recognizing the problem is the first step toward fixing it. But the House Republican national security agenda does more than recognize the problem, it outlines a laundry list of steps that must be taken. While lengthy, the agenda boils down to the simple idea of keeping America safe, strong, and prosperous.

The House GOP agenda is particularly strong on protecting the homeland, addressing a range of issues from homegrown threats to border security, to enhanced cyber defenses. It also calls for a stronger response to the Islamic State, also known as ISIS, paired with a dedicated effort to win the battle of ideas against radical Islam. It is clear that defeating terrorists abroad and protecting Americans from terrorists at home are the top priorities of House Republicans.

Ryan’s agenda makes important commitments to our friends. House Republicans are right to stand up against Obama’s policy of disengaging with the world and turning our backs on our friends. U.S. alliances, such as NATO, or with countries like Japan, South Korea, and Australia, are vital to keeping our country safe and prosperous. The U.S. should stand with its friends because it benefits our economy and our security.

This agenda is also right to support the economic benefits of free trade. As Heritage analysts Bryan Riley and Anthony Kim have put it, “the freedom to trade is the foundation of America’s modern economic system that provides historically unprecedented opportunities for individuals to achieve greater economic freedom and prosperity.”

For all the strengths of this agenda, there are some gaps. The threat of terrorism is real and enduring, but the new challenge facing the United States is a return of conflict with other major countries.

The U.S. is not at war with Russia and China, but both are taking deliberate efforts to weaken America’s position in the world, to undermine our relationships with our friends, and to strengthen our adversaries. This challenge is fundamentally different from that of terrorism, and requires leadership from Congress and the next president.

Ryan’s agenda mentions the challenges from Russia and China, but misses an opportunity to put this challenge on par with the ongoing threat from terrorism.

The House GOP agenda also misses an opportunity to push for rebuilding the U.S. military. While the agenda calls for “adequate, predictable budgets” for the military, it does not mention the 25 percent budget cut that the military has received in the last five years, and the resulting dramatic cuts to the size and readiness of the U.S. military.

The U.S. military cannot be rebuilt to the size and strength it needs to be to protect our vital interests without a larger defense budget.

Ryan has laid out an agenda that is in keeping with what most Americans want: a safe, strong, and prosperous country. This agenda follows President Ronald Reagan’s goal of peace through strength, and that view still resonates with most Americans, particularly in the face of growing threats. This national security agenda is strong and bold. Now Ryan and House Republicans need to put these words into action.