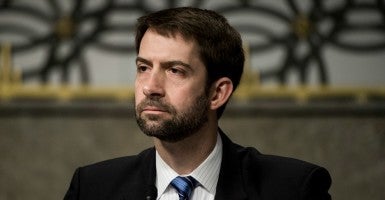 President Barack Obama is running out of time to fulfill his campaign promise to close the military prison at Guantanamo Bay and bring some detainees to the United States. As the last months of Obama’s term approach, a new Republican measure could now make that a political impossibility.

An amendment to the National Defense Authorization Act spearheaded by Sens. David Perdue, R-Ga., and Tom Cotton, R-Ark., would require the director of national intelligence to declassify and make public the terror records of former detainees.

The more information that’s available, the freshman duo are betting, the less likely the public will be to allow the White House to empty and close the prison.

“I suspect the American people, and frankly a lot of our allies, would be a little hesitant to see [detainees] released, to see them walking into their country,” Cotton told reporters at The Heritage Foundation Wednesday.

Closing the prison has remained politically unpopular in recent years. A recent March 2016 CNN/ORC national poll showed that 56 percent, as versus 40 percent, want to keep the prison operating.

At the height of the war on terror, the detention facility held 780 prisoners. As American involvement abroad declined and detainee transfers to foreign countries increased, the prison’s population has declined steadily.

Now just 80 detainees remain, including Khalid Sheikh Mohammed, the mastermind of the 9/11 terrorist attacks. And because of the prisoners’ increased security threat, they present a unique challenge to the administration.

They’re not “innocent goat herders or people captured by a marauding out of control military in 2001,” Cotton, a member of the Senate Armed Services Committee, explained. “The people left are the hardest of the hardcore.”

In February, Obama presented Congress with his strategy to deal with those detainees and finally shutter the detention center.

The White House has already transferred some prisoners to other countries for release or further detention. The administration plans to bring the rest, who cannot be released because they are awaiting trial in military commissions or present a significant threat, to a security facility in the U.S.

But Perdue blasted the White House plan as “a political crusade,” telling The Daily Signal that future transfers represent a dangerous security risk. A member of the Senate Foreign Relations Committee, he explains that about 30 percent of detainees released from Guantanamo return to terrorism.

To highlight the risk, Perdue and Cotton both point to a recent report released by the Director of National Intelligence. Of 653 former detainees, according to the report, 196 were “confirmed or suspected” of reengaging in terrorist activity and another 122 were living outside of restrictive custody.

Cotton said that detainees would still pose a threat, even while incarcerated, if brought to the U.S. after staying in Guantanamo.

In addition to the immediate danger presented to prison facilities and surrounding communities, Cotton questioned whether prisoners could even be detained long term, “given what I suspect some judges will do applying the full scope of constitutional rights to people who don’t have those rights.”

The Senate is expected to vote on the underlying military authorization bill before the end of the week. It’s not clear though, whether the declassification amendment will pass or even receive a vote.

The White House threatened to veto the underlying bill on Wednesday. Though Cotton and Perdue’s amendment wasn’t mentioned by name, the administration bristled at the bill, warning that certain measures would “require the disclosure of sensitive national security information.”

A flashpoint in recent years, keeping Guantanamo Bay open has traditionally been a bipartisan issue. Since 2009, and beginning under Democratic control, Congress has repeatedly voted not to provide Obama with funding to close the facility.

“I think if we can get a vote on it there’s a good chance it could pass,” he told The Daily Signal. “I mean it’s been seven years now that Democrats have voted with us and against the president on Guantanamo Bay issues.”