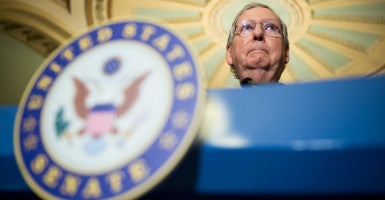 Senate Majority Leader Mitch McConnell, R-Ky., blames talk radio for the “notion that somehow a Republican Congress can overcome a Democratic president and eventually bring him to his knees when it’s not possible." (Photo: Bill Clark/CQ Roll Call/Newscom)

Senate Majority Leader Mitch McConnell takes pride in his reputation as a great compromiser. But the Republican leader won’t concede on one point: He refuses to let conservatives fight the White House for lower spending levels.

McConnell, R-Ky., outlined his political roadmap for government spending on Tuesday, sketching out the routes he sees available: an omnibus package, individual appropriations bills, or a government shutdown.

“Here’s the choice: You either pass each individual appropriations bill or you pass the omnibus, which gives the president all the power, and the ability, to argue that somehow we’re shutting down the government if we don’t go along with it,” McConnell told an audience at the American Enterprise Institute.

McConnell’s remarks come as both chambers of Congress struggle to pass spending bills. Rather than approve all government spending through a one-and-done omnibus package, Republicans have tried to fund the government through 12 individual appropriations bills.

So far, it hasn’t gone so well.

Conservatives complain that GOP leadership caved to President Barack Obama when Congress increased spending by $30 billion last year above limits in the 2011 Budget Control Act. Instead, they want the GOP-led House and Senate to reduce discretionary spending from $1.07 trillion to $1.04 trillion.

But with a Democrat in the White House, McConnell said conservatives are being unreasonable. To try to reduce spending, he predicted, would risk a government shutdown.

“Unfortunately, my party owns the government shutdown brand,” McConnell said, referring to a 2013 episode when Congress, led by conservatives, withheld government funding in protest of Obamacare. The Republican leader added, “It’s not a good brand.”

Campaigning on a promise to repeal Obamacare and lower spending, Republicans took control of the Senate and McConnell became majority leader in 2014. Now he complains that conservatives have exaggerated Congress’ ability to reverse the controversial health care law or control government spending.

“For one thing, I think a lot of today’s voters have really been misled by talk show hosts and others about what’s achievable when you don’t have the White House,” McConnell said.

He added that grassroots conservatives “have been fed” an impossible notion, namely that “somehow a Republican Congress can overcome a Democratic president and eventually bring him to his knees when it’s not possible.”

Offering a civics primer at a signing event for his new book, “The Long Game,” McConnell argued that conservative policies—such as overturning Obamacare or reducing government spending—require a Republican executive.

“There’s a lot of discussion about the Constitution, but yet people don’t seem to know anything about it. For example, there’s a president,” McConnell quipped. Then drawing a pen from his pocket for emphasis, he added that “he’s only one of 300 and something odd million of us who can sign a law or veto a bill.”

While under Republican control, the Senate has not stood still. McConnell points to several key conservative standalone bills that Congress passed and Obama vetoed, such as repeal of Obamacare and the controversial Waters of the United States Environmental Protection Agency rule.

McConnell blamed the lack of policy riders on Democrats. He noted that last year, Democrats were able to strip off numerous amendments from an omnibus package.

“We couldn’t get them through the Senate,” he said, “which gets back to the point I made earlier … which is that there’s only one person in America who can sign something into law. So he has a lot of leverage in these legislative battles.”