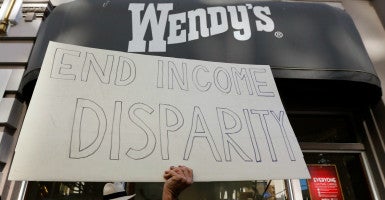 More than 60 percent of San Diego voters supported Proposition I, a ballot measure raising the city’s minimum wage to $10.50 an hour, effective immediately, and $11.50 an hour at the start of 2017. The measure also guarantees five paid sick days to workers.

“Business owners are nervous and unhappy,” Ann Kinner, owner of San Diego’s Seabreeze Nautical Books and Charts, told The Daily Signal. “It’s done. We can’t argue about it anymore because it’s been settled for now, but it’s not going to have a good impact, and we’re waiting for the whatever to hit the fan.”

Small business owners in the Southern California city planned to fight against the measure after the city announced it would appear on the June ballot. However, the debate was overshadowed by action in the California Legislature, where lawmakers passed legislation phasing in a $15 an hour minimum wage over the next five years.

Gov. Jerry Brown, a Democrat, signed the measure into law in April.

“I think we had the wind knocked out of us, and we all just kind of collapsed,” Kinner said. “Brown’s announcement upset and shocked everyone. It was like, wait a minute, we’re still fighting this battle, and you just kicked the legs from out under the table.”

Kinner said a group of local small business owners, which made up the San Diego Small Business Coalition, convened to discuss a campaign to combat the city’s ballot measure. However, they struggled to come up with the $1 million needed to actually challenge San Diego’s $11.50 minimum wage hike, particularly in the wake of Brown’s decision to sign the statewide increase to $15 an hour.

“It knocked us all out,” Kinner, who’s lived in California for more than 40 years, said.

Though California residents will see the wage hike phased in over the next five years, San Diego’s initiative accelerates that plan, as businesses statewide won’t begin paying their workers $11.50 an hour until 2018.

In San Diego, the minimum wage will increase to that amount on Jan. 1.

Last month, the Wendy’s fast-food company announced its plans to install automated self-service kiosks in its restaurants and linked the decision to upcoming minimum wage increases in both California and New York.

Other businesses like Pasadena-based Jacobs Engineering Group and Burbank-based C and S Propeller are moving to Texas, citing the “business friendly environment” and “greater flexibility in … day-to-day operations,” respectively, for doing so.

Jason Roe, a spokesman for the San Diego Small Business Coalition, said he’s heard of restaurants shedding entry-level positions like bussers and requiring wait staff to assume their responsibilities to save money.

“We’re seeing anecdotally what is going to be happening in the San Diego local economy,” Roe told The Daily Signal. “[Restaurants] are looking for every angle to reduce the cost of business, and it’s resulting in higher prices.”

The San Diego Small Business Coalition was born out of the San Diego Regional Chamber of Commerce and other business groups.

Kinner, who has one part-time employee and already closes her store one day each week to cut costs, said she is deciding how to address San Diego’s new minimum wage. She is thinking about cutting her last employee and running the store by herself or closing the store for two days each week instead of one.

“I’m going to try and figure out how to cope,” she said. “The one thing people just don’t look at is the cumulative effect of all of these increases. It’s not just wages. Up goes my workers’ compensation costs, my insurance and utility costs, fuel costs, everything increases.”

San Diego leaders have been debating the measure to raise the minimum wage for nearly two years.

After the city council had voted to override the mayor’s veto, the San Diego Small Business Coalition launched a petition drive to force a public vote. The group collected the required number of signatures to get the initiative on the ballot, and the city council placed Proposition I on the June primary election ballot.

According to City Councilor Todd Gloria, approximately 172,000 San Diego residents will see their wages increase to $10.50 an hour immediately, and $11.50 an hour next year. Another 279,000 will earn five paid days of sick leave.